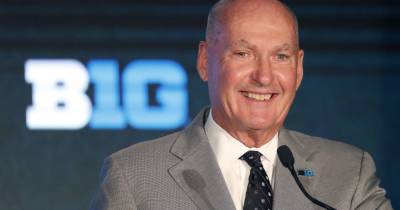 Why is Jim Delany always smiling? Because he knows IU Basketball fans are idiots ready to part with $10 for BTN+!

Tonight’s exhibition between Indiana and Gannon will not be on BTN, available on almost all basic tier cable/online packages.

If IU fans want to watch Indiana open its basketball season, they will have to subscribe to BTN+ for at least one month at a cost of $9.95 or if you have nothing better to do with your cash – $79.95 for the year.

What will BTN offer viewers instead of Indiana Basketball?  Tonight, it’s mens soccer games between Maryland and Penn State, and then Michigan and Michigan State.  Nothing against soccer, but guess which has a larger fan base – IU Basketball or the four programs featured tonight.

So IU fans will pony up tonight for a service that’s needed to receive a game that should be carried on a network we already receive.  But the Big 10 wants more of your cash, because $750 million in annual revenue isn’t enough.

To rub salt in the wounds of IU fans, if they subscribe today to receive the feed of the IU vs. Gannon contest, they may have to renew for an additional month in order to watch the IU vs. South Dakota State game on November 30th.

Greed sucks, and the Big 10 is showing itself to be exceptionally greedy.  Eventually, the greed will cause a switch to flip in fans that will drive them from sports as a passion.  People will decide to do something else with their time rather than admitting to themselves they are dullards.

For now, we’ll figure out how to subscribe to this BTN+ service that outside of IU Basketball has no value beyond being a service to parents of student-athletes who play olympic sports.  Thirty eight people will watch soccer tonight while thousands subscribe to BTN+ and tune in for IU vs. Gannon.  The cash register will ring, and Big 10 commissioner Jim Delany will pat himself on the back for screwing passionate fans out of their money.

Fans will feel like idiots for ponying up $10 with the potential for another $10 a month from tomorrow.  Delany will grin, and fans will watch while a feeling of stupidity gnaws at them.

At some point, the scales will tip and Delany will smile from the first tee of his country club because he will have retired with a bank account filled with our cash.