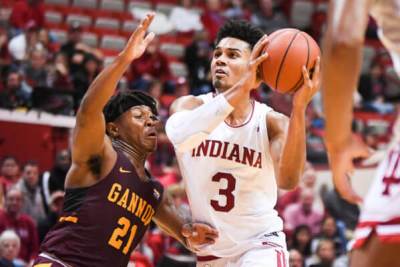 Justin Smith was efficient last night, but is he capable of being tough?

IU Basketball has brought a mixed bag to fans during the past three seasons, and last night’s meaningless exhibition played in front of friends and family at Simon Skjodt Assembly Hall was no different.

The Hoosiers played well in the second half, overwhelming Gannon by 30 points, but Gannon actually led late in a miserable first half.

There are two ways to look at this game, and these two views go a long way toward defining what kind of Indiana Basketball fan you are.

Perhaps no fan base is as nutty as Indiana when it comes to the demand for tough guy basketball.  For many years, toughness was a foundational quality of the program.  The Hoosiers might get beat, but there was no doubt if it was because of a lack of toughness, players would be held accountable.

For a few years under Tom Crean, it seemed like Bloomington was a rest stop for superior athletes from the east coast as they waited for their turn to bounce to the NBA.  Indiana was a lot of things – tough was not among them.

When Archie Miller was hired, it was assumed the demand for toughness as a point of emphasis for Indiana Basketball would return.  Seemed like Miller was tough.  How else could a little cherubic point guard from Pittsburgh start for an NC State team good enough to beat Michigan State in the NCAA Tourney?

But Indiana through Miller’s first two seasons looked very similar to Crean’s teams.  Last year, the Hoosiers appeared to be respectful and well-rounded kids playing basketball instead of competing.  When shots fell, they won.  When they didn’t, they lost.  Romeo broke his thumb.  Race Thompson and Rob Phinisee suffered concussions.  Indiana wobbled – losing 12-of-13 during one brutal stretch, and they failed to qualify for the NCAA for the third straight year.

Each season, expectations are that IU will find a way to recapture toughness and become feared again – like the teams that prowled Assembly Hall when it was new and quirky rather than historic and revered.

Last night’s win against Gannon showed another IU team unwilling to compete until it was forced to, which is another disappointing hallmark of recent squads.

November will bring fits, spurts, injuries, development, stretches of good, and moments of malaise.  The Hoosiers will win because losing to Western Illinois, Portland State, North Alabama, Troy, Princeton, Louisiana Tech, or South Dakota State is unthinkable.  At least it used to be.

It will also bring a multitude of complaints, praise, predictions, joy, and angst.  That’s Indiana Basketball in a nutshell as fans wait for the Miller rebuild to finally bear fruit.

Maybe this is the year for Indiana to find a way to meet the expectations of a fanbase that is among the toughest to please in college basketball.

Hey, somebody associated with Indiana Basketball has to be tough, right?