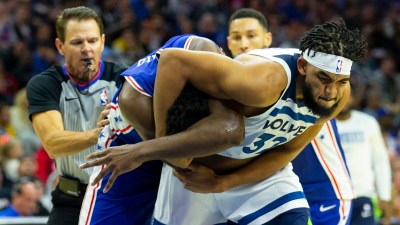 This was compelling, and the NBA needs to tolerate compelling content!

The greatest explanation of toughness and competition in sports is communicated in a speech by Sean Connery’s character in The Untouchables:

That’s sports.  That’s competition.  How far are you willing to go?  How much can you tolerate being disliked by your opponent?  Are you willing to anger a teammate by demanding more of him?  Can you assume a role that will bring wins but cost dollars?

It’s not about fighting.  It’s about competing.  And if players are willing to sacrifice everything in order to win, they are going to win more often.  If that means a few fights, well that’s the cost of doing business, and the NBA (NFL and MLB too) should support that.

Joel Embiid and Karl-Anthony Towns got in a little wrestling match the other night after competing like the result mattered.  Neither landed a punch or suffered an injury – other than their pride.  Both were suspended for two games, and I don’t understand why.

Sports contests shouldn’t be friendly and social tests of skill where adversaries congratulate one another before, during, and after.  Games should be wars won by teams willing to be tough, rancorous, and unforgiving.

Fans wants players getting off the team bus looking forward to competing against each other – not anticipating a chance to reconnect.  Tough ass guys willing to go just a little bit farther than their opposite numbers are fun to watch.  Losers trying to join a fraternity of stars during postgame socialization makes fans nauseous – or they should.

I’m not advocating fights, but watching competitors push each other far enough outside their comfort zones that it occasionally spills over into ill-tempered chaos is great fun.  If players appear to care less about the result of a game than we do as fans, that makes us feel stupid.  Suspending players for a meaningless wrestling match penalizes Embiid and Towns for exactly the level of malice fans crave.

Friction causes heat.  That’s physics.  People love watching a fire.  They’re fascinating.  What’s not fascinating is watching a bucket of water.  People don’t sit around a bucket of water in November sipping hot chocolate with a splash of something a little more adult.  They sit around a fire.  Why does the NBA keep throwing water on their fires?

NBA popularity exploded when Larry Bird and Julius Erving tried to strangle each other, Michael Jordan and Reggie Miller squared off, and Bill Laimbeer became the most hated player in NBA history by trying to bait everybody into a fight, and succeeded many times.

Every once in a while fate smiles upon leagues, and teams nobody cares about become interesting because of a rivalry between players.  No one on this planet cared about Karl-Anthony Towns and the Timberwolves before the wrestling match, but we’ll be watching when Embiid and Towns square off next on March 24th.

Here is video of some historically relevant NBA dust ups (tell me these were bad for the NBA’s popularity):