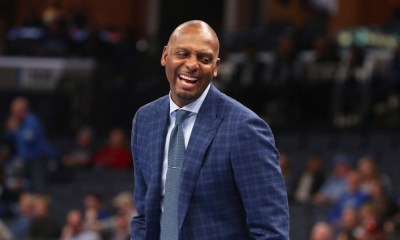 Memphis coach won’t be laughing long if the NCAA’s Restitution Rule is deployed against the Tigers.

The NCAA does not like being dragged into court by member universities or their athletes, so in 1975 it enacted the Restitution Rule that may be used to punish schools and programs who parade attorneys into a courtroom to seek relief from a finding that an athlete is ineligible.

This is exactly what happened when the NCAA declared ineligible Memphis freshman and likely #1 2020 NBA pick James Wiseman.  Attorneys asked for a temporary restraining order that allows Wiseman to play.  It was granted, Wiseman played against UIC Friday night, and the NCAA is not happy about it.

The reason for the NCAA’s ruling is that back in 2017, Wiseman’s mom accepted an $11,500 loan from Penny Hardaway to cover the expenses of the family’s move from Nashville to Memphis.  At that point, Hardaway was the basketball coach at Memphis East High School (where Wiseman would play), and six months from becoming the head coach at the University of Memphis (where Wiseman committed in November, 2018).

While Hardaway was not Memphis’s coach at the time of the loan, he was a booster for the school, according to the NCAA.  That makes the loan an impermissible benefit.

None of those facts are in dispute, although why $11,500 was needed for a move is anyone’s guess.  I’ve never spent anywhere near that much to move my family – not close – but that’s beside the point.

The issue is that the NCAA does not want to send attorneys to a courtroom every time they issue a ruling that a school or athlete disagrees with.  The members agree to abide by NCAA findings because the alternative is expensive courtroom chaos.

If athletes like Wiseman can kick the can down the road while playing through March after receiving an impermissible benefit, there is no available penalty for the NCAA to assess for cheating – at least not against athletes.

The Restitution Rule (shown below) gives the NCAA attention-getting consequences it can levy against a school.  Among the available penalties are postseason ineligibility, forfeiture of TV revenue, and vacated wins.

It may seem unfair to deprive athletes of access to the judicial system, but competitive balance in college sports depends upon trust that the NCAA will behave in the best interests of its members.  The nuclear option represented by the Restitution Rule provides a significant disincentive for those who game the system by demanding their day in court.

I’m usually opposed to the level of autocracy employed by the NCAA, but it’s hard to imagine a lot of good coming from schools and athletes forcing the NCAA to argue in court the merits of every single ruling of ineligibility.

Without the Restitution Rule, schools could ignore the NCAA, request TROs, and enjoy the fruits of a superior talent like Wiseman without fear of meaningful consequence.

As with most NCAA issues, the behavior of greedy schools and athletes demand an equal and opposite response that paints the NCAA as jackbooted thugs.

The Restitution Rule, as with all NCAA rules, was written and voted on by its members.  It was made necessary by those who operate on (or far beyond) the fringes of fairness.

The NCAA might not be a perfect oversight association, but it’s all that stands between college sports and anarchy.

Here is the text of the rule:

If a student-athlete who is ineligible under the terms of the constitution, bylaws or other legislation of the Association is permitted to participate in intercollegiate competition contrary to such NCAA legislation but in accordance with the terms of a court restraining order or injunction operative against the institution attended by such student-athlete or against the Association, or both, and said injunction is voluntarily vacated, stayed or reversed or it is finally determined by the courts that injunctive relief is not or was not justified, the Board of Directors may take any one or more of the following actions against such institution in the interest of restitution and fairness to competing institutions:

(a) Require that [the athlete’s] individual records and performances achieved during participation by such ineligible student-athlete shall be vacated or stricken;

(b) Require that team records and performances achieved during participation by such ineligible student-athlete shall be vacated or stricken;

(c) Require that team victories achieved during participation by such ineligible student-athlete shall be abrogated and the games or events forfeited to the opposing institutions;

(d) Require that individual awards earned during participation by such ineligible student-athlete shall be returned to the Association, the sponsor or the competing institution supplying same;

(e) Require that team awards earned during participation by such ineligible student-athlete shall be returned to the Association, the sponsor or the competing institution supplying same;

(f) Determine that the institution is ineligible for one or more NCAA championships in the sports and in the seasons in which such ineligible student- athlete participated;

(g) Determine that the institution is ineligible for invitational and postseason meets and tournaments in the sports and in the seasons in which such ineligible student-athlete participated;

(h) Require that the institution shall remit to the NCAA the institution’s share of television receipts (other than the portion shared with other conference members) for appearing on any live television series or program if such ineligible student-athlete participates in the contest(s) selected for such telecast, or if the Board of Directors concludes that the institution would not have been selected for such telecast but for the participation of such ineligible student-athlete during the season of the telecast; any such funds thus remitted shall be devoted to the NCAA postgraduate scholarship program; and

(i) Require that the institution that has been represented in an NCAA championship by such a student-athlete shall be assessed a financial penalty as determined by the Committee on Infractions.