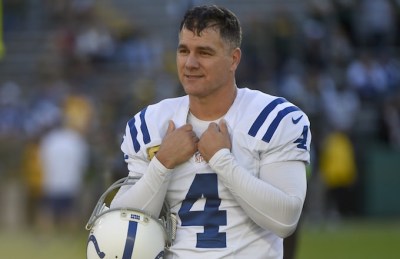 There is something admirable about a guy with a tough poker hand throwing all his chips into the middle of the table.  Bad golfers who press bets over and over earn our esteem if not our money.  The short squatty guy hitting on the leggy model deserves credit for taking a shot.

I felt like I was watching the NFL equivalent of those scenarios today as Colts coach Frank Reich said, “Adam is our kicker. Chris (Ballard) and I have talked about the situation. We have confidence in Adam. Obviously, there have been other kickers in here working out. We have the confidence in Adam. He is not just our kicker. He is a leader on our team, he is a captain and his presence is important. We feel we need him going forward and have the utmost confidence in him.”

For those of you keeping score at home, the word confidence was used three times in his eight sentence statement.  Casinos are built with money from people at blackjack tables who are confident they they’ll win two hands by splitting 10s.

He went on to say, “I just really believe in him. I believe whatever we’re going through is just a phase and he is going to help us win games and get to where we want to go.”

That’s great, but what is it other than past glory that gives Reich, Ballard or anyone else within the Colts front office or locker room a reason to suspect that Vinatieri is the answer to the question his own mediocrity continues to ask?

Let’s exit the fantasy land where Reich and GM Chris Ballard have planted their flag.

Adam Vinatieri has missed 11 kicks through nine games this season.  I love that Reich is confident in Vinatieri, but that confidence is based upon a dream that a 46-year-old kicker will suddenly revert to the automatron he was a couple of years ago.

Sadly, that’s not the way life works.  Athletes degrade, and then they hang on a little too long as everyone understands what they can’t grasp – that what made them special is gone forever.

Instead of hoping Vinatieri will suddenly regain his accuracy, let’s look at the previous nine games as a foreshadowing over the final seven.  The numbers do not paint the same pretty picture Reich tried to conjure.

If it seems like I’m trying to crap all over Vinatieri, I’m only stating the easy to read facts that have forced Ballard and Reich onto their skinny limb.  They are doubling down on a kicker who would have been fired weeks ago if not for his past glory.

Firing Vinatieri would be gut wrenching.  He’s a very nice and normal guy with an extraordinary gift.  I’ve enjoyed our conversations, and hope he makes every kick the rest of the season and shuts the mouths of twits like me before retiring as the best who has ever kicked a football.

That’s the exit he deserves, but as Clint Eastwood says in Unforgiven, “Deserve’s got nothing to do with it.”