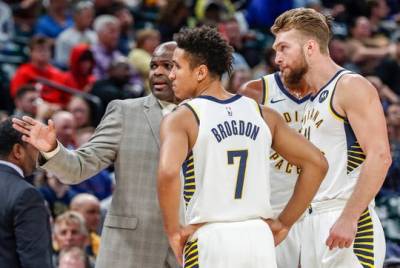 No muss and no fuss suits the Pacers just fine as long as they win.

The Indiana Pacers are 7-4, having won all seven during their latest eight-game stretch, and no one is talking about them.

National media fawns over the crazy numbers posted by James Harden, star-driven teams in LA, and the nonsensical drama that the New York Knicks wear like their jerseys.  Local media is so focused upon Adam Vinatieri and the Colts that the Pacers recent run has barely drawn mention on TV or radio.

Granted, the Pacers haven’t yet played a team among the NBA’s best, but they keep winning and winning despite missing four key cogs to a roster without a true star.

Victor Oladipo will be out for at least another month as he recovers from his quad tendon tear.  Myles Turner was supposed to get some attention as an all-NBA defensive player of the year candidate and borderline all-star, but he’s been on the shelf since the season’s fourth game with a sprained ankle.  Jeremy Lamb has endured a couple of different dings, and Goga Bitadze is in the concussion protocol.

That’s two starter, Oladipo’s backup, and a back-up center all sitting as the Pacers win, but this team is more about who’s playing rather than who’s sitting.

Malcolm Brogdon has been stellar at point guard.  As good as team president Kevin Pritchard said Brogdon would be when he traded for the former Buck, he’s been better.  Averaging 20.7 points, 8.5 assists and 5.2 rebounds per game, Brogdon has been steady as hell, and he’s played outstanding defense too.

How about Domas Sabonis?  Fans were split on whether the Pacers should keep Sabonis or not prior to the extension he signed just before the regular season.  Now, there is no doubt Pritchard made the right call.  Sabonis is averaging 19.8 points and 13.3 rebounds in an average of 35 minutes per game.  And his defensive rating of 101 is a career best.  In fact, all those numbers are career bests.

T.J. Warren has been a bucket machine, averaging 18.5 points per game with a career best in offensive efficiency.  He’s also defending at the highest level of his career.

The Pacers are not a sexy team with a bunch of media whores who generate stories with their off-court behavior, unless you could Oladipo as a contestant on The Masked Singer (I don’t begrudge him a little attention for being a talented singer – especially as he rehabs).  They just play basketball – not for individual glory or to gain popularity within the inner circle of the NBA’s star system.  The Pacers just want to win games.

That aligns them with a fan base that claims to crave team-first basketball.  I know they are only 13.4% of the way through the season, so maybe some fans and media are waiting for games like tomorrow night’s challenge in Houston against Harden and the Rockets to verify the Pacers are worthy of our attention.

The Greek Freak comes to BLF Saturday night, so the tests against the NBA’s best are coming fast and furious.  If basketball fans in Indiana are as savvy as they claim, the Pacers should be a win against either the Rockets or Bucks from seeing an explosion of popularity.

This is a team built to the specifications of knowledgeable fans, and now it’s up to those fans to prove they are worthy of an outlier of an NBA roster with no stars, no drama, no grandstanding – just solid basketball that starts on the defensive end.