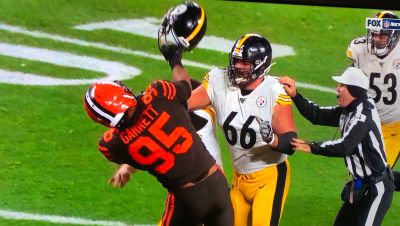 The helmet as a weapon can cause brain injury or death. Myles Garrett’s loss of control in swinging it will cause a massive suspension.

As the Cleveland Browns and Pittsburgh Steelers wrapped a nondescript game last night, something quite descript happened.

Browns defensive lineman Myles Garrett took Steelers quarterback Mason Rudolph to the ground after Rudolph delivered a screen pass that should have ended the game.  Rudolph began grabbing at Garrett’s helmet.  Garrett took exception and pulled Rudolph’s helmet from his head.  He then hit Rudolph over the head with it.

Steelers offensive lineman David DeCastro laid on top of Garrett, and Maurkice Pouncey punched and kicked Garrett.  While Rudolph complained to the referee, Browns tackle Larry Ogunjobi hit Rudolph from behind knocking him to the ground.

Twitter exploded with calls for Garrett to be prosecuted, blame for Rudolph as an instigator, demands for Browns coach Freddie Kitchens to be fired, and all kinds of yelling from every conceivable perspective.

As with all incidents of sports mayhem, the level of heat with social media hot takes rose to where they barely made sense.  That’s a natural evolution that we come to expect from the cyclotron of illogic Twitter becomes in these moments.

So let’s roll the heat back and take a sane look at the incidents and the potential ramifications for those involved:

Myles Garrett – Suspension for at least the rest of the season.  God smiled upon the NFL (and Rudolph) when he walked away after being brained by his own helmet as it was swung by Garrett.  Garrett is not going to be prosecuted.  The NFL does not need on-field activities adjudicated in court.  Because of the public demand for justice, the NFL will express to media and fans its seriousness in levying an extreme punishment that will appease those who might push for an assault arrest.

Mason Rudolph – Rudolph was at least complicit in escalating the fight by trying to pull off Garrett’s helmet and then pursuing him as DeCastro led Garrett away.  A suspension is unlikely because the optics of sitting a QB who was the victim in the most visible portion of the melee is difficult to defend.

Larry Ogunjobi – Might be suspended for the blindside hit on Rudolph, but his true punishment will always be how his weak move will define him.  As offensive linemen were restraining and pummeling Garrett, Ogunjobi chose to defend his teammate by hitting a defenseless quarterback.  From the ground, Rudolph called Ogunjobi “bitch.”  That’s about right.

Maurkice Pouncey – He landed several punches and kicks to Garrett as he was pinned by DeCastro.  He’s going to be suspended for a game or two, but nobody in the Steelers locker room is going to argue with his actions.

David DeCastro – If anything, he was a peacemaker.  If the NFL has a prize for outstanding leadership in the face of abject chaos, DeCastro should get it.

Freddie Kitchens – The coach of the Browns was not directly involved in the chaos, but the lack of discipline shown by his team dating back to training camp and the final joint practice with the Colts at Grand Park has been troubling.  During that messy workout, the Browns instigated too many fights to count. They lead the league in penalties with 112 (next highest total is 97).  Kitchens will not be suspended because indifferent/ineffective leadership is not against NFL rules.

The upshot of last night’s riveting nightmare is there will be a second chapter as these two teams meet December 1st in Pittsburgh.  That will drive thinking as Roger Goodell metes out punishment for the participants.  If he goes weak, the players will take matters into their own hands in 16 days.  That’s the last thing Goodell wants.