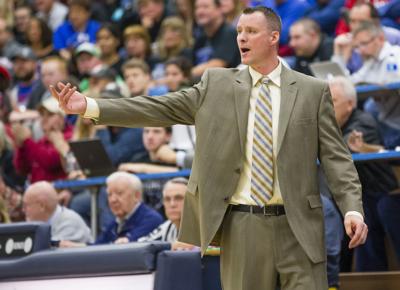 Southport basketball coach Eric Brand is suspended for recruiting, but his entire team will suffer a postseason ban.

Even with the best of intentions and motives, violating IHSAA rules that ban recruiting comes with a cost, but the penalties levied against the Southport basketball program for recruiting Nickens Paul Lemba go too far.

Lemba, a freshman at Southport, is 6’6″ and originally from the Democratic Republic of the Congo.  Southport coach Eric Brand paid tuition in the amount of $5,548.00 for Lemba to attend Southport.  As a result, Lemba is ineligible for the season, Brand is suspended for two games, the program has been placed on probation, and the team will not be allowed to participate in the state tournament this March.

The suspension is just – if light.  The probation makes sense.  Recruiting issues always result in a year long ban for the athlete.  I get those three spankings.  But the ineligibility for the postseason applies a penalty to innocents.

The Cardinals have at least five seniors on its team who, through no fault of their own, will not be allowed to finish their high school careers by playing in the state tournament.  Brand wrote the check, not the kids.  Why punish the kids?

A postseason ban is occasionally utilized by the NCAA to punish programs that wander from strict adherence to its rules, and it makes sense because NCAA Tournament appearances bring cash and notoriety to the offending university.  For high schools, there is small practical consequence for the school.  Every team qualifies and the profits are scant.

The primary victims are the players who are banned from their final act of a season and career.

Recruiting is wrong because it brings a disadvantage for players who compete at schools where  it doesn’t happen.  But the penalty should be born by the coach who engages in it and the player who benefits, not the other players who are innocent participants.

If the IHSAA wants to suspend for a full year a coach who recruits, I’m can understand that.  Even if the motive is altruistic, recruiting cannot be allowed or high school basketball will become a race to gather talent rather than teach.  Sectional

The IHSAA needs to rethink its decision to impose a postseason prohibitions as it swing a punitive hammer at the wrong nail.

3 thoughts on “Southport Basketball coach recruits, so players are penalized with postseason ban?”