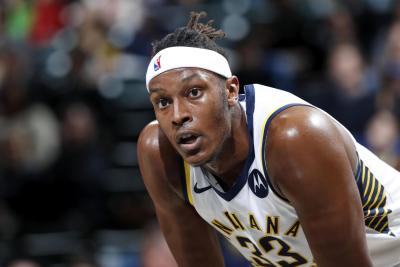 Myles Turner doesn’t fit yet, but it is way early in the process for the Pacers to figure out whether he can.

It’s way too early to draw any conclusions about the Indiana Pacers roster just 14 games into the 2019-2020 season.  It’s also premature to call for anyone on the roster to be dealt because they don’t fit – yet.

The Pacers are 8-6 despite missing Victor Oladipo for all 14 games, Malcolm Brogdon for the last two games, Jeremy Lamb for several, and Myles Turner for eight.  Players who were thought to be fringe players at best heading into the season have stepped up and performed beyond expectations.

Because they share the ball (leading the league in assists per game) and play solid team defense (sixth in defensive rating), this is a fun team to watch – especially for savvy fans.

Despite the many reasons for good tidings, there is an undercurrent of dissatisfaction with starting center Myles Turner that is curious.  There is no doubt the team has yet to find a rhythm with Turner on the court, but calls for him to be traded border on the hysterical.

No one knows at this point whether Domas Sabonis and Turner can coexist as starters with both playing better than 30 minutes per game, but a decision to end this experiment are premature in the extreme.  Turner has only played in six games.

No doubt coach Nate McMillan needs to work to put all of the roster parts in a position to take full advantage of their talents.  At the top of the list is finding a way to utilize all of Turner’s strengths while also not costing the Pacers their best chance to win games.

In a league where it’s generally believed players hit their prime at the age of 26, Turner is three years shy of discovering exactly how good he can be.  He’s under contract through 2022-2023, so a deal would not be prompted by a belief that Turner will leave via free agency.

As with any potential trade, the return needs to at least equal or exceed the value of the departing asset, and fans have no idea what that might be.  The question of trading Turner can only be answered by knowing what the other end of the exchange might be.  It could only be accurately evaluated years down the road when the contributions of Turner and the pieces gathered by the Pacers are viewed.

Relax.  Enjoy watching this team figure itself out while winning, and if you feel the need to voice your concern during a night when the Pacers win by 29 in Brooklyn, take a deep breath and embrace the notion that there are 68 games left in this young season.

Maybe there is no path for Turner to flourish as a cog in this wheel, but until the Pacers know that for sure, trading a player of his potential value is borderline malpractice – unless the return is so substantial it cannot be ignored.

Don’t demand team president Kevin Pritchard hurry through this process.  It won’t do any good.  He and his staff will figure it out in good time.  Enjoy the ride.