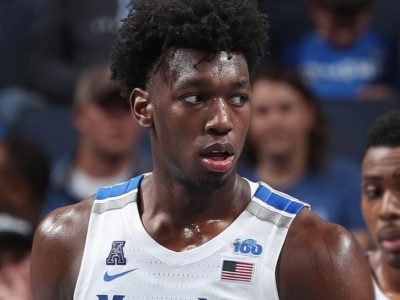 James Wiseman’s mom got her cash. Penny got his player. James got suspended for 11 games.

Soon to be NBA millionaire James Wiseman has been suspended by the NCAA for an additional 11 games as a player at the University of Memphis while he counts the days until his college career ends.

Wiseman’s mom accepted a loan of $11,500 from current Memphis coach (he was an AAU and high school coach at the time of the loan) Penny Hardaway.  The loan, which is an impermissible benefit because Hardaway was a Memphis booster prior to becoming a coach, covered moving expenses as the family moved to Memphis from Nashville.

As has become the norm, the kid who got nothing and did nothing is the target of the NCAA’s wrath.  Hardaway wrote the check, mom cashed it, and James will sit for what amounts to roughly one-third of his college career.

I get that Hardaway took part in the exchange of cash for services prior to being hired as Memphis’s basketball coach, so maybe that act does not prompt a response by the NCAA.  But if penalizing Wiseman is right and just, certainly some measure of crime and punishment should be assessed against Hardaway.

The strange and unpleasant truth about organizations administered by adults that oversee powerless young adults or children is the punishments will always impact the young adults and children before an adult is disciplined.

When I was a camp counselor, I spent the first couple of weeks working to make the campers’ experience more enjoyable.  One afternoon another counselor grabbed me and said, “You’re getting this backwards – we’re not here for the kids; they are here for us.”

He was only wrong in principle.  In practice, that’s the way the world works.  The rules are made by the adults for the good of the adults.  The players?  They get to play as long as no one tries to use them for $11,500 or buy their services.

And so it goes.  Kids pay while adults get paid.

Wiseman will be in the NBA making millions soon enough, as long as he doesn’t get hurt and burn his ticket, but that doesn’t excuse the behavior of his mom, coach, or the NCAA.