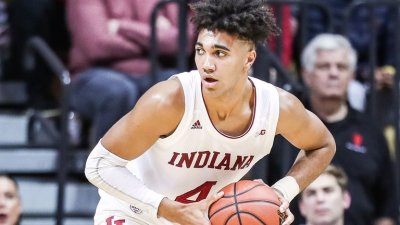 Trayce Jackson-Davis had a very nice night, scoring 21 points and 13 rebounds. He appears to be Indiana’s most indispensable puzzle piece.

Basketball is a vexing game.  It attracts those who seek the spotlight but rewards those who reject it.

Indiana’s 88-75 win over Louisiana Tech last night was a perfect example of what basketball can be when played by a team – and also what happens when players selfishly pursues glory.  Indiana showed fans both one half at a time.

The first half was a beautiful exhibition of connected defense and selfless offense.  The defense limited Louisiana Tech to difficult shots and allowed few second chances.  Offensively, Indiana worked the ball quickly to open space and created good shots.  The result was a 43-21 lead.

Devonte Green scorned 15 points off the bench in that beautiful first half.  The ball moved through him and to him, and Green hit open shots.

The second half was not beautiful.  Green was not beautiful either – missing all three field goal attempts and committing a couple of turnovers.  Green wasn’t the only offender, just the most obvious.  Right or wrong, Green is the poster boy for the fortunes of these Hoosiers.

Green’s talent makes him capable of winning games, but his desire to show it can also cause the Hoosiers to lose their balance and become very ordinary.

Indiana allowed Louisiana Tech to close to within 10 points with 9:34 left before the extreme effort the shave the deficit finally took its toll on the Bulldogs.  Between fatigue and foul trouble, Louisiana Tech did not have enough left in the tank to get closer, and the Hoosiers won its sixth game without a loss.

The top item in the postgame notes released by IU’s media relations folks trumpeted this 6-0 record as the first time the Hoosiers have started a season with six straight wins since 2013.  The truth behind the record is that there is no way Indiana should lose to any of those opponents if they played each 100 times.

There is not a single player on those six rosters of the teams that Indiana recruited, and none of those teams could have been in the game to recruit any of the scholarship players on Indiana’s roster.

When the real games begin a week from today against Florida State at Simon Skjodt Assembly Hall, Indiana will win or lose based upon its collective toughness.  Talent will be relatively equal in most games, so the most important differential will be behavioral.

And so we come back to how players work together and deny their strong impulse to use their individual talent to help the team win.  That’s the magic of basketball – finding the sweet spot where all players on the court commit to one another as teammates rather than to themselves as individuals.

Indiana showed the magic of embracing that collective vibe in last night’s first half, and discarded it entirely in the second.

This season can be a step in the right direction for an Indiana program that desperately needs one.  Or, it can wobble through another uneven campaign defined by in-fighting and the craving for individual accolades.

Last night was an opportunity for Indiana to witness all it is capable of.  Which path it will choose will be fascinating to watch.