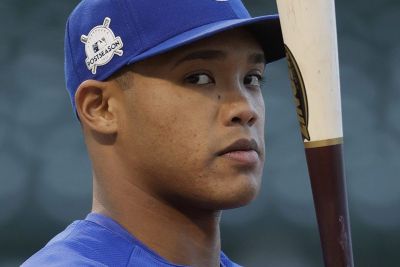 I hope Addison Russell has learned not to beat women, but I’m glad he’s no longer a Cub.

The Chicago Cubs announced tonight they are not tendering middle infielder Addison Russell a contract for the 2020 season.  That’s good news for Cubs fans who didn’t want to be conflicted about cheering for a player who beat and terrorized his wife.

Russell was terrible offensively in 2019 (.237/.308/.391) and continued his defensive regression, so even if he wasn’t a domestic abuse perp he likely would have been spiked.

Cubs president Theo Epstein was tone deaf at this time last year when he agreed to sign Russell to a one-year deal after an interview with his ex-wife which detailed his brutality was published.  As a part of the deal, Russell agreed to enroll in long term psychological care to deal with his propensity for violence against women.

What Epstein grew to understand was that monitoring Russell’s treatment and growth sucked bandwidth from the front office, according to an interview with Epstein on 670 The Score.

And what did the Cubs get for their generosity?  Poor play, terrible PR, and an internal mess.  They forgot the first rule of management by continuing to employ Russell – treat an employee like an employee and a human as a human being.  Managers can’t be friends.

If Epstein wanted to be a friend who shepherded Russell toward enlightenment – that wonderful.  But do it as a friend, not a boss.

Now he can continue to help as a friend unencumbered by being the boss.  Russell forced Theo’s hand by doing the thing former manager Joe Maddon always implored his players to avoid – sucking.

The Cubs have moved on.  Fans can now move on.  Russell will get a minor league deal somewhere.  Better a year late than never.