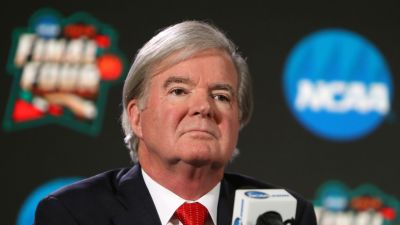 NCAA president Mark Emmert is not the cause in the ongoing corruption of college sports – just a seemingly feckless bystander powerless to end it.

The NCAA has a trust problem, according to its president Mark Emmert.

Emmert is spending a significant amount of time meeting with lawmakers trying to head off a spate of legislation that will correct the course of college athletics because the NCAA can’t, or more accurately won’t.

The trust issue exists for two reasons; first is the accurate perception that college athletics makes millionaires of white administrators and coaches at the expense of an unpaid labor force comprised primarily of African Americans playing football and basketball.

The second is that the NCAA is not as good at penalizing corruption as the media is at reporting it.  The result is the apparent tolerance for wrongdoers.

Neither is good, but who can argue with the financial results for the schools that comprise the NCAA’s membership?  Money is rolling into Power Five conference universities faster than they can spend it.  In order to balance the books so it doesn’t look like everyone is getting rich but the athletes, schools engage in creative accounting that shuffles cash to other departments in the form of what is called “transfer expenses.”

There is no financial penalty for the schools and administrators for sleazy behavior, so the members aren’t eager to punish it.  Because the members don’t want to upset the apple cart, the NCAA has no authority to unilaterally bring the hammer down, despite Emmert’s keen desire to be seen as a solver rather than a causer of the corruption.

I know that defies prevailing logic by letting Emmert and his staff off the hook, but it’s important to remember the NCAA is nothing more than a collection of its members.  The members determine policy.  It’s a bottom up dynamic, not top down.  Emmert is powerless without the support of members, as he learned early in his reign when he tried to clean things up without the support of the university presidents.  They taught Emmert very quickly who runs collegiate sports.

So the NCAA has a perception problem driven by corruption being tolerated by members who embrace the status quo with their inaction.  The axiom – “Those with money tend to want to keep it,” comes into play here.  Sharing wealth is never the first choice of the wealthy.  Generosity being rewarded with tax breaks is a good example of society’s understanding of that dynamic.

The only downside to corruption in collegiate athletics is the stain left by public reports.  Illegal payments to recruits and athletes have been made for as long as games have been played, and no one has ever done what has been necessary to stop it because the system has never hurt the popularity of the guilty programs.  Fans only stomp their feet when the other guys cheat.

Emmert is the face on the dartboard, but the real perpetrators are the pious nincompoops who run college athletics – the presidents and athletic directors who are accountable for revenue and fan engagement.  Distrust should be directed toward them, not the NCAA staff in Indianapolis who not only fight corrupt coaches, shoe guys, and handlers, but those real crooks at the universities who cash big checks for looking the other way.

The University of North Carolina didn’t get away with academic fraud because the NCAA didn’t investigate reports from Mary Willingham and others.  They went unpunished because university attorneys cleverly appealed the NCAA findings by arguing the fraud was not an athletic benefit due to non-athletes also enrolling in the sham classes.

That’s next level smart – smart enough to provide a blueprint for other schools uninterested in providing real educations for their athletes.

College sports is as entrenched in corruption as a Chicago alderman, and the fix has proved to be distasteful enough to make its implementation a pipe dream unless state legislatures and/or congress decide the time is right to put an end to what former NCAA president Walter Byers called the “neo-plantation mentality” of college athletics.

For college presidents, the cure is worse than the disease, no matter how eager Dr. Emmert is to administer it.  But for lawmakers, maybe a thorough re-boot of the system would move sports fans to the ballot boxes in their support.