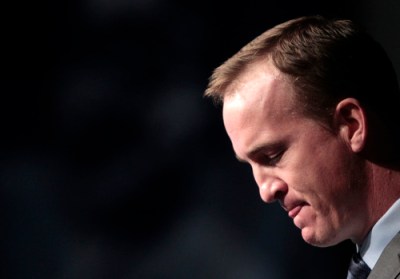 Peyton Manning release is the biggest story of the soon-to-conclude decade. “I will always be your quarterback,” is the quote of the decade.

First of all, if you are one of those lunatics who insist this decade will end with after 2020, please stop reading.  I cannot help you, and your thoughts on correct decade definition are bonkers.  The 20s start with 2020.  Arguing that is the defiant act of an entrenched contrarian.

Now that we’ve cleared out the kooks, let’s get down to the top 10 Indiana sports stories of whatever we called this previous decade.

10 – Brandon Miller leaves Butler.  After Brad Stevens bounced to the Boston Celtics, AD Barry Collier tabbed Miller as the next head coach.  During the offseason following a difficult 14-17 campaign – Butler’s first in the Big East – Miller took a leave of absence from which he never returned.  He was replaced by Chris Holtmann, who was the right guy in the right place at the right time.  Holtmann’s three teams won 70 games and earned a bid to the NCAA Tournament in every season.  He was then replaced by LaVall Jordan after being hired by Ohio State.  We have not heard from Miller since.

9 – Pacers bounce back.  The prevailing wisdom among national media after Paul George demanded and received a trade out of town was that the Pacers would founder.  Not so much.  The Pacers won six more games without their “star” in 2017-2018 than they had the year before.  The players exchanged for George – Victor Oladipo and Domas Sabonis – were a breath of fresh air compared to the self-immersed fringe all-star.  Pacers fans never missed George, and the team continues to flourish without him.

8 – Indianapolis hosts very successful Super Bowl.  Yeah, the weather was incredible, but the best part of the city during that wonderful Super Bowl week was the generosity of welcoming Hoosiers.  The volunteers smiled and helped, while the city’s layout kept people happy and safe as they careened from party to party and finally the game without the need of a car or cab.  The amount of goodwill fans and media carried from Indy back to their hometowns continues to pay off today.  Because of its performance in 2012, Indy is correctly viewed by many as the perfect venue for national sports events.

7 – Pacers steal Victor Oladipo and Domas Sabonis.  George requested a trade from the Pacers simultaneous to this public comment at a charity softball game, “I’m under contract as a Pacer. That’s all that needs to really be known. I’m here. I’m a Pacer. Again, what I’ve been dealing with is stories. You guys talking or teams talking. I’m a Pacer. There’s no way around that. This is my team, my group and this is where I’m at.”  Less than three weeks later, George was on his way to Oklahoma City in exchange for two future all-stars (assuming Sabonis goes – which seems safe).  Two years after that, George was off again – this time to Los Angeles.

6 – Indiana fires Tom Crean.  After nine years that saw the ascension and then decline of Indiana hoops under Crean, AD Fred Glass asked his coach to meet him in his office.  Crean read the writing on the wall and boarded a plane out of town with his family.  Crean’s act wore thin within the athletic department, among Indiana high school and summer coaches, and with the majority of one of America’s most fervent fanbases.

5 – Chuck Strong.  There was a perfect confluence of events that made the 2012 Colts a huge feel-good story.  After the Colts finished the 2011 season 2-14, coach Jim Caldwell and president Bill Polian were fired, Peyton Manning was released, Chuck Pagano was hired, Andrew Luck was drafted #1 overall, and Pagano was diagnosed with cancer.  As the likable Pagano successfully battled cancer, Bruce Arians led the team to an 11-5 record, and Luck emerged as an elite level quarterback.

4 – Paul George snaps his leg in Las Vegas.  The Pacers were coming off back-to-back trips to the Eastern Conference Finals when George’s lower leg snapped during a USA Basketball scrimmage.  The Pacers changed, and George changed.  He worked his way back to health and productivity, but neither he nor the Pacers have won a playoff series since.

3 – Andrew Luck retires.  Everything but the timing of Luck quitting was predictable.  Injuries and rehab had eroded Luck’s love for the game.  He was a reluctant superstar who was never comfortable in the spotlight, recently married, and with a baby on the way.  Always reflective and smart, Luck decided enough was enough and he retired 15 days before the start of the 2019 season.  There are consistent rumors that he might return to football – either in the NFL or XFL (his father is the commissioner of the XFL).  Those rumors are clickbait.  Luck understands his body feels better because he no longer plays – and so he will never play again.

2 – Butler goes to back-to-back NCAA championship games.  We tend to discount the special accomplishment of the 2010 and 2011 runs by Butler because the Bulldogs did it twice.  The first appeared to be a 49th Street miracle.  The second solidified Brad Stevens and Butler as a program that deserved national respect.  The result of the tourney success was an invitation to slide into the A-10 and then the Big East.  The Butler program has evolved from cute and cuddly Horizon League team to nationally relevant Big East competitor.  Stevens became the coach of the Boston Celtics and Matt Howard deserves a statue outside Hinkle Fieldhouse for their incredible success.

1 – Peyton Manning released.  When a certain hall of Famer with gas left in the tank is released, it’s a huge story because it doesn’t happen very often.  Manning’s multiple neck surgeries made him a huge risk and with Andrew Luck as the clear #1 pick in the 2012 draft, the Colts decided the risk of continuing with Manning at QB was greater than the reward.  Manning signed with the Denver Broncos, went to two Super Bowls, and won one.  The Colts went to the playoffs during Luck’s first three seasons before injuries and the relentlessness of rehab eroded his availability and finally caused his retirement

As a postscript, the sale of the Indianapolis Motor Speedway and Hulman Company assets to Roger Penske could have a huge affect on the city’s iconic signature event.  It could be the #1 story of the decade depending upon what Penske does with the property and Indy 500.  The deal has not closed, so changes have not been made and we don’t know what this sale means.