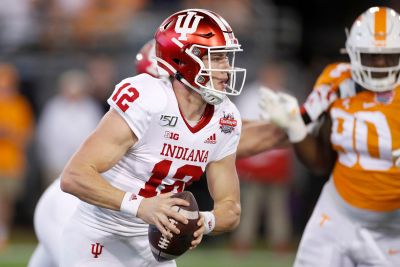 Peyton Ramsey was good enough as a starter to beat Tennessee. Will he return for another bite at the bowl apple?

Indiana lost to Tennessee last night’s Gator Bowl after leading by 13 with under five minutes left.  We can spend a lot of time talking about what happened – blown onside kick recovery, wasted timeouts, bad clock management, missed kicks – OR we can focus on what should be THE story of the 2019 Hoosiers.

After two seasons as the starting quarterback, Ramsey was relegated to the bench by a coaching staff that valued the tool set of Michael Penix over the incumbent.  The coaching staff was right.  Penix has a stronger arm and quicker feet, and Ramsey publicly responded to his disappointment with graceful and generous support for Penix.

Ramsey then relied upon what earned him the success he enjoyed as a freshman and sophomore – hard work and support of his teammates.  Never a quarterback that wowed anyone with arm strength or dynamic speed, Ramsey has always found a way to excel despite dominant physicality.

For those Indiana fans more familiar with basketball than football, think Jordan Hulls, the point guard for the Hoosiers almost a decade ago.  Hulls was never thought to be a gifted athlete, and had to work harder than anyone else to overcome stereotypes and earn respect.

Penix played five games between injuries, validated coach Tom Allen’s faith in his abilities, and then was shut down with a shoulder issue after the win against Northwestern.

Ramsey’s mental and physical toughness kept Indiana’s season from unraveling as he nearly found a way to lead the Hoosiers to an upset win at Penn State, and then earned a double OT win at Purdue.  It didn’t work out for the Hoosiers last night in Jacksonville, but that is not a reflection of Ramsey’s ability as a quarterback or leader.

What a great example Ramsey has set for those who are faced with a setback and consider quitting or mailing it in as a defiant response to temporary setbacks.  That is the best part of college athletics – it teaches lessons related to work ethic that are difficult to access elsewhere.

The next chapter will be whether Ramsey wants to stick around Bloomington for his final season or bounce elsewhere as a grad-eligible transfer.  If Penix comes back 100% healthy, why would Ramsey accept the back-up spot as an insurance policy for the Hoosiers as his eligibility expires?  If Ramsey stays, will Penix bet on himself to supplant Ramsey or seek another program?  And what about Jack Tuttle, the highly touted transfer from Utah?

Whatever Ramsey decides, he’s earned the opportunity, and will always be thought of as an incredibly tough quarterback who showed his teammates and fans that adversity should always be answered with hard work.

The offseason is going to be every bit as interesting as last night’s Gator Bowl.