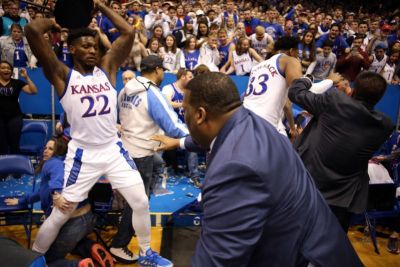 KU forward Silvio De Sousa is shown ready to bring a stool down on the head of an opponent during last night’s brawl in the latest of a series of sordid affairs in Bill Self’s program.

When things go bad, they tend to go bad in bunches.  That axiom has never been truer than for Kansas Basketball over the past 12 months.

Basketball programs and businesses are like planets circle a star.  As orbits erode, they become more erratic.  Order is never restored. (Who says I didn’t pay attention during Astronomy?)

Coach Bill Self was thought to be impervious during the previous 15 seasons.  His Jawhawks won an incredible 14 straight Big 12 championships, an NCAA title, eight conference tourney titles, and four Final Fours.  He’s not imperious now.

Last season marked the first season the Jayhawks finished anywhere other than atop the Big 12 since 2003-2004.  Then the NCAA got involved as a federal trial opened the door for incriminating transcripts of texts between a shoe guy and Self to be entered into evidence.  The result was a notice of allegations that included –  lack of institutional control, three Level 1 violations, and a head coach responsibility charge against Self.

Then Kansas went rogue with its “Late Night in the Phog” celebration to kick of the season.  Snoop Dogg performed as anyone with a brain would expect.  There were dancers on stripper polls and extreme profanity, which left the university unnecessarily embarrassed and apologetic.

Last night saw a college basketball brawl the likes of which we have been spared since the Cincinnati vs. Xavier game in 2011.  At the very end of the Kansas vs. Kansas State game, forward Silvio De Sousa blocked the layup of a K-State player and then stood over him in front of the K-State bench.  Players ran onto the floor, threw punches, De Sousa lifted a stool over his head and looked ready to bring it down upon a K-State player with great vengeance and furious anger before it was grabbed by a curtsied photographer.

Oh yeah, the entire brawl was in the area where physically challenge fans watch the game.

De Sousa has been suspended indefinitely pending a university investigation.  Not sure what part of the brawl requires an inspection of the facts.  The entire fracas was broadcast live and has been shown 100s of times on the ESPN family of networks.

In the midst of these four very public sidesteps from their typical excellence have been other minor departures from reason, like KU’s refusal to share the findings of an internal investigation the supposedly exonerates Self and the program.  Why refuse to share good news?  Many suspect that reports of good news are being made to kick the can down the road until the NCAA finally levies inevitable sanctions against the program and Self.

Kansas Basketball appears to be in the process of self-immolating.  There is a time at which coaches either lose interest in recruiting players who can be controlled – or when they decide holding them accountable for small indiscretions is someone else’s responsibility.  Before you know it, those small issues become big ones – like brawls.

Self is unquestionably one of the most successful coaches of his generation, but his program has devolved into unpredictable chaos.  Last night’s brawl was the latest evidence that KU’s orbit of the NCAA has eroded to the point that more mayhem is not just likely but certain.

Self has made millions and millions of dollars at Kansas.  The time may have come for him to exit with his dignity left mostly intact and spend some of it.  The alternative is for him to become the latest victim of the type of hubris that ended Rick Pitino’s career at Louisville.