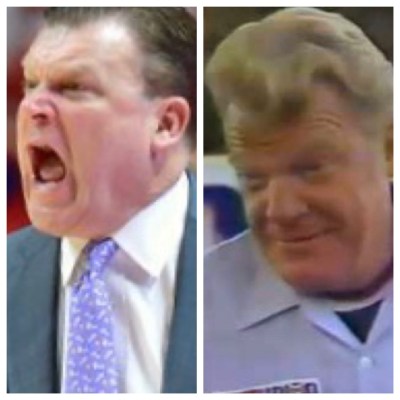 If Illini coach Brad Underwood wasn’t so damn likable, it would easier to mock him for looking like Murph from the old 76 Gas Station commercials.

When I was a college student at Indiana, half the fun of being a basketball fan was disliking opposing coaches, and the Big 10 during that era was full of coaches that were easy to dislike.

Bill Frieder (Michigan), Lou Henson (Illinois), Eldon Miller (Ohio State), Dr. Tom Davis (Iowa) and Gene Keady (do I need to specify his school?) were despised in Bloomington, and it was fun.  They were villainous buffoons in our very Indiana-centric view of basketball.

None of the dislike was serious.  I mean, who could possibly dislike Keady?  He’s one of the nicest guys on the planet.  He was like the Joker to Bob Knight’s Batman.

It’s fun to see opponents as enemies, and coaches are the faces of the rival programs.

That fun is becoming more and more difficult for Indiana fans.  First of all, back in the 1980s and 1990s Knight did a wonderful job of disparaging opposing coaches, so we defined them for the flaws Knight fed to us.  Excuse the language, but Indiana fans referred to Michigan’s coach as Bill “Chicken Shit” Frieder because Knight did.  And we always will.

Today, not only don’t we have Knight’s help in mocking opponents, we have Big 10 coaches who are almost impossible to loathe.  Ohio State’s Chris Holtmann is a great guy – competitive, smart, and honorable.  Wisconsin’s Greg Gard is transparent and self-effacing.  Michigan State’s Tom Izzo is competitive, earnest, and a guy you would love your son to play for.  Nebraska’s Fred Hoiberg is calm, smart, and relentless.

How about Matt Painter at Purdue?  Who cannot respect Painter?  He’s a basketball junkie and nice guy so good at coaching toughness, he wins conference championships despite an almost total lack of five star recruits.

I could go on.

I held out hope that Illinois’ Brad Underwood would be someone I could at least mock, if not detest.  Illinois has a history of hiring the occasional oddball as coach, so maybe Underwood would be the latest easily jeered coach.  Sadly, watching Illinois throttle Purdue last night, I saw two things that will forever define Underwood as likable and impossible to ridicule.

The first was his reaction to Illinois guard Alan Griffin being tossed from the game midway through the first half for intentionally stepping on the chest of Boilermaker Sasha Stefanovic.  When the refs told Underwood Griffin was done, he turned to Griffin to tell him to leave the floor.  There was no feigned outrage or histrionics.  Underwood understood his player screwed up and was being held accountable.

Then, ESPN analyst Dan Dakich briefly interviewed Underwood.  He first asked what Underwood would be doing if he wasn’t coaching.  “Playing golf,” was the answer.  Yep.  Me too.  Dan then asked Underwood for his favorite movie and TV show.  “Caddyshack and Seinfeld,”  Underwood said.  Yep and yep.

How can I dislike a guy with such impeccable taste in movies and TV?  I will always root for IU against Illinois, but I can’t experience the joy of hoping for Illinois to lose as I did when they were led by Henson or Bruce Weber.

I’m not a tremendous fan of Minnesota’s Richard Pitino or Iowa’s Fran McCaffery, but neither rises to the level of a true annoyance because their programs hover in the middle of the Big 10. Coaches need to be more successful than Pitino and McCaffery to earn my ire regardless of their annoying bench behavior.

It’s hard for Indiana fans who remember the days of Big 10 dominance to wrap their arms around a conference where they have no reason nor authority to mock opposing coaches.  But it might be even harder to admit that the Big 10 might not just be the best coached, but also the conference with the most likable coaches.