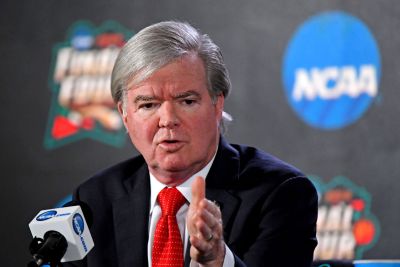 Those who make rules for college transfers are not concerned with the welfare of student athletes.

There is an argument that most student-athletes who transfer should sit out for a year at the new school.  Adjusting to a new campus and environment takes time.

Be just a student for a little bit.  Get your grades rolling.  Make some friends.  Work on your game.  Nice.  Same argument goes for freshman eligibility.  It might be a good idea for freshmen to get acclimated before competing.

But whether I believe it’s a good idea to sit for a year is not the point.  What you believe about immediate eligibility for transfers isn’t important either.  Hell, what the NCAA thinks is good for the student-athlete is beside the point.  The rule mandating a year without playing has nothing to do with any of that.  It’s all about athletes remaining the property of their schools for as long as possible

And we know what motivates the NCAA and its conferences to legislate a year-long timeout for athletes because the rules only apply to those who play baseball, men’s or women’s basketball, FBS football or men’s ice hockey.  Those who play other sports can wander from school to school like hobos if they like.

The common thread among the sports whose athletes must sit for a year is the existence of a professional league to which they might aspire.  So the fear expressed by the rule forcing a year of assimilation is that the student-athletes with the brightest futures will bolt to enhance his or her future earnings.

They are the most important to the success of their schools and coaches, so of course there is a rule to penalize them for bolting.

Again, if the NCAA interceded based upon the common sense belief that it’s a great idea to sit for a year, that would be a defensible activist stance.  But we know they don’t believe that because the rule doesn’t exist for wrestlers, swimmers, golfers, soccer players or track athletes.

Because the rule was clearly sanctioned based upon something other than what is in the best interest of student-athletes, any argument to keep it for that reason is specious.

If there is evidence that immediate eligibility for transfers damages the professional prospects of a student-athlete, that might move the debate in another direction.  Not only doesn’t that evidence exist, there are dozens of examples of NFL players who spent a year or two in junior colleges before transferring to a D-1 school who demonstrate a year in the cooler is of no benefit to student-athletes.

A reasonable conversation can be had as to whether it’s best for student-athletes to wait a year to compete, but it’s disingenuous to suggest the rule mandating it exists for the good of student-athletes.  It exists to penalize potential pro’s from becoming someone else’s star.

The middle ground solution that is likely to pass is a one-time transfer with immediate eligibility be granted to all D-1 student-athletes.  This is limited to one-time, I assume, because no one views habitual transferring as a good thing.

No argument there, but why should a rule be needed to protect student-athletes from themselves?  The answer is that it doesn’t.  It protects schools and coaches from losing valuable commodities – just like the current rule.