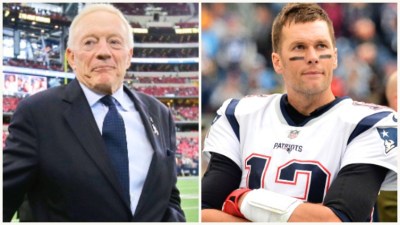 Jerry Jones and Tom Brady know they are a terrible pairing, but that doesn’t keep sports media from blathering about it.

The Cowboys already have Dak Prescott as their quarterback, and Tom Brady is unlikely in the extreme to be tantalized by an opportunity to play for “America’s Team.”

No one is his or her right mind believes it is even a remote possibility, so how did this idiotic notion of Brady to the Cowboys start cropping up on talk shows and in digital media?

People who think analytics are used only by NFL, NBA, and MLB general managers don’t understand media and how it works.  During a visit to ESPN in Bristol a few years ago, an executive told me, “We are a research company that broadcasts sports.”  In other words, ESPN didn’t become ESPN by allowing people to talk about whatever the hell they want.

Combine a story with both Brady and the Cowboys, no matter how absurd, and people pay attention.

Stephen A. Smith, current captain of sports media’s USS Preposterous, was one of the few to try to give this story credence, “Put Tom Brady, with his pedigree, his knowledge, his championship experience, in Dallas.  I got Ezekiel Elliott behind me running the football. I’ve got this offensive line that’s going to protect me. I’ve got a No. 1 in Amari Cooper. I’ve got a reliable tight end in Jason Witten.  I’ve got others as well – Terrance Williams and these boys.”

You don’t think Smith – or Mike Greenberg and the cast of Get Up! – just sit around and talk live on network TV about whatever pops into their heads, do you?

The four qualities ESPN and other broadcast outlets shoot for each segment are relevance, authenticity, fun, and creativity.  Relevance refers to topic choice, and all successful media outlets study relevant directions for their content.

No sane analyst sees Brady to the Cowboys as realistic or a good idea for either.  To prove the point, as I write this, the cast of ESPN’s NFL Live are leading the show with a segment about where Brady fits best.  Is it the Patriots?  Is it the Chargers?  Is it the Raiders?  There was no mention of the Cowboys, to the credit of the hosts, but host Suzy Kolber promised more to come in upcoming segments.

As someone who watches ESPN and listens to sports talk radio, you almost certainly wonder why hosts talk about some teams and never about others.  The answer is always – ALWAYS – because listeners care more about those topics.  How do managers know which topics or teams are most popular?  That is their job.

As a radio program director, I would always approach it from two directions – traditional call-out research project by a company that specializes in those things, and advisory panel roundtables where I would ask listeners exactly what they expected from us.

The results were consistent, and we used them as part of the formula to build segments as well as hire hosts.

ESPN used that same methodology on a much larger scale to marry two of the the NFL’s most iconic brands.  The result was inane blather, but sometimes that’s the name of the game.