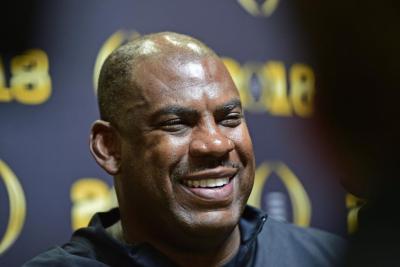 Colorado football coach Mel Tucker will smile all the way to East Lansing and the bank.

That’s good for Tucker, who will earn a significant raise.  It’s good for Michigan State too as it can finally claim it got the guy they wanted all along.  It’s not good for assistant coaches at Colorado who be screwed if not retained by the incoming coach or taken by Tucker to Michigan State.  Players who believed in Tucker are stuck at Colorado, and that’s not good either.

Saturday afternoon, Tucker tweeted that he was committed to Colorado:

While I am flattered to be considered for the HC job @MSU_football, I am committed to @CUBuffsFootball for #TheBuild of our program, its great athletes, coaches & supporters. #UnfinishedBusiness #GoBuffs

We are #Relentless #Culture #TheBuild

Four days later, he’s reportedly not committed at all – and off to Michigan State.

I have no problem with Tucker bouncing – either because of his contract or because he’s violating his word to players, coaches, and the university.  He has a $3-million buyout, so those are the breaks for Colorado.  They negotiated that buyout, and they have to abide by it.

Tucker has a family that will benefit from the move, and he has ambitions that can be satisfied by this move.  It’s a rare man that honors a commitment in favor of living his dreams, so that is an unfair standard to enforce.

But for the players who are prohibited from leaving Colorado with their immediate eligibility intact, Tucker’s decision is a miserable step in the wrong direction.  Players can transfer, but without a waiver being granted by the NCAA, they are forced to sit out for one year.

Despite an explicit understanding recruits commit to attend a university, most make their decision to attend a school based upon the relationship with the head coach.  That relationship is too important for the NCAA to ignore and too one-sided in favor of the university to be considered fair.

This is yet another area of the university – athlete relationship where the adults get a free and lucrative pass, while the athletes on the field, court, ice, course, track, and pitch are forced into a corner where they must nod in agreement, do what they are told, and be thankful for what they get.

What they get is not insignificant, but it pales in comparison to they way cash is flung around by athletic departments belonging to conferences with huge budgets driven by massive media deals.

So Tucker will live his dream by moving to East Lansing, while players and coaches who trusted him will live in limbo within the borders of indentured servitude maintained by NCAA rules.

None of this is to say that Tucker should be bound to Colorado for the duration of his contract.  He’s earned the right to work where he likes as long as he (or Michigan State) can satisfy the contract he and Colorado negotiated and signed.  It would be nice if players and assistant coaches could trust a tweet posted four days ago, but that clearly is not the world in which we live.

The Big 10 is considering a rule that would allow athletes the freedom to transfer one time with immediate eligibility.  That’s a reasonable solution that releases athletes from the penalties waged upon them as unwitting victims of a coach’s dreams coming true.

Maybe we’re about to enter an era where reason is embraced – where what is right is the rule rather than the exception.  I know it’s an ambitious dream, but better to cling to a long-shot hope for fairness than embrace the ideology of greed and mandated student-athlete acquiescence.