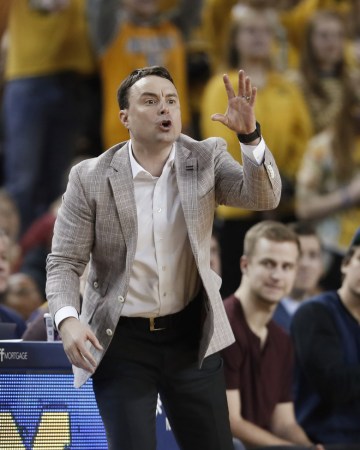 Archie Miller looks stern in yesterday’s postgame presser, but does he have the mettle to change what bothers him?

“What’s the worst that can happen?” is a question kids ask themselves all the time as they assess the risk and reward scenarios for behavior.

If I make everyone in class laugh, I might get a detention.  Is that worth it?

Within the Indiana Basketball program, it appears the harshest discipline Archie Miller is willing to wield is an unchanging rotation and an occasional scowl.

Not much of a deterrent for those not hard wired toward competing every single opportunity.  It takes awhile for kids to understand that regret is the most effective teacher.  Opportunities lost haunt adults for a lifetime.  That lesson requires experience these kids have not banked yet.

The only playing time casualty this season has been Damezi Anderson, who has earned a spot at the end of the bench because of an entrenched inability to make shots.  Other than that, players continue to get their run regardless of their lack of desire to compete.

When I was in high school, I knew the punishment for breaking curfew was being grounded for one week, so as the deadline approached at various parties on many Friday nights, I asked myself whether staying later was worth a week at home.  The problem for my parents was that I liked being at home almost as much as going out.  Being grounded was hardly a punishment at all.  So guess what I did?  Stayed out as late as I wanted quite a bit – or stayed home.  It was a win-win.

Seems that’s where Indiana Basketball is right now.  By Miller’s own admission, his Hoosiers refused to compete yesterday.  That’s happened many times this season, and whatever punishment Miller has deployed has yet to bring a change in attitude.

The players seem to have figured out that whatever consequence Miller is willing to Impart, it’s not worth the counter measure of their investment of consistent effort.  Miller has yet to get their attention in three years at IU, and it appears he is unwilling to use the nuclear option of telling a player he has forfeited the right to wear an Indiana uniform.

That’s led to a permissive culture that allows bringing effort on the players’ schedule rather than the coach’s.  Missed shots are on players.  Missed opportunities to lead are all on Miller.

Teams become what leaders tolerate, and Indiana is now 12th in the Big 10 standings.  Unless there is a pivot toward quality effort and play, IU will miss the NCAA Tournament for the fourth straight year.  That hasn’t happened since 1972, when the field totaled 25 teams.  Bob Knight’s Indiana teams never missed the NCAAs in two consecutive years.

That means that Devonte Green and De’Ron Davis will be the first seniors at Indiana in just under a half century to never earn a trip to March Madness.  Clearly, despite Davis’s performance yesterday, that ignominious distinction hasn’t moved either senior to pony up on a regular basis.

With six opportunities remaining this season for the Hoosiers to prove themselves worthy of an NCAA Tournament berth, the roster appears ill-prepared in every sense to compete.  Miller frequently expresses frustration, but until his irritation is visited upon the players in a way that gains their attention and compliance, nothing will change.

Few coaches or managers want to tell their players employees to pack a box, but that’s the price for sitting in the big chair.  Indiana University isn’t paying Miller more than $3-million per year to teach children how the pack-line defense works.  They pay him to turn children into men, and at that responsibility Miller has utterly failed to this point.

Indiana’s basketball team is filled with boys enjoying a prolonged adolescence because their leader has not yet found or utilized the punishment needed to compel a change in attitude and discipline.  Not a person affiliated with Indiana Basketball will avoid regret for what this season might become.

Change comes when it is less painful that the pain of maintaining the status quo.  If losing by 24 to Michigan isn’t pain enough, Miller’s job requires he raise the ante.

We’ll see Wednesday night at Minnesota whether he got that job done.

2 thoughts on “Archie Miller needs to bring the gift of pain to the Hoosiers, or change will never come”