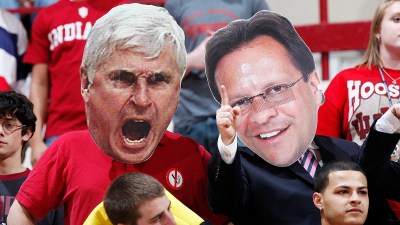 Bob Knight and Tom Crean are often the focus of silly tweets about the most misunderstood fanbase in college basketball.

Indiana Basketball fans are probably as tired of being painted as dopes as they are of the way their favorite team fails to compete.

Twitter can be an echo chamber of idiocy, reducing people and groups to their lowest common denominator.  Stereotypes are embraced and proffered as absolute truths.  This has happened to IU alums and fans for as long as social media has existed.  We are the cavemen of college basketball – people too stupid to understand the way the game is played today and unwilling to embrace a new era of roster construction.

Some of the harangues against IU fans have a basis in truth.  Others are patently false, but because those particular drums are so relentlessly beaten, those doing the thumping believe they are legitimate.

Here are six of those fake news fabrications that deserve correction:

“IU fans need to understand it’s not 1987 anymore.”  No one wants it to be 1987.  To be honest, I’m not sure what the assertion that IU fans want to turn back the clock is all about.  All Indiana fans want is a team that executes and competes as a unit like the game matters to them.  It’s also important that the program does not cheat and graduates players.  Not sure why those concepts equate to Indiana Basketball from 33 years ago, but it does to critics.

“Indiana is paying for firing Tom Crean!”  This is a preposterous notion.  Crean’s ability to recruit nationally at a high level had eroded, and IU’s brand value among recruits in its home state had deteriorated to zero under Crean.  The arrogance and indomitability that allowed Crean to achieve success early in his run at IU became his greatest enemy as people grew tired of his presence.  That was true for players, administrators and fans.  A better argument can be made that IU is currently paying a high price for keeping Crean too long.

“Indiana Basketball is irrelevant!”  That Indiana hasn’t won a national championship since 1987 means it hasn’t been successful.  Success is not a prerequisite for relevance.  Granted, there isn’t a traditional undergraduate on the Indiana campus that remembers IU’s last trip to the Final Four.  Again, the memory of success does not equate to relevance.  There are hundreds of thousands of Indiana grads whose most present tether to their alma mater is through basketball.  CBS and ESPN don’t choose Indiana for national games because no one cares about them.

“If you fire Archie Miller, no coach would touch the Indiana job”  This is insanity.  If Indiana offered every coach working in college basketball the head coach position at $5M per year over seven years with five years guaranteed, 99% would sign the deal with a giant smiles on their faces.  Whether or not fans are deranged and the administration is thought to be stacking the deck against basketball, giant stacks of cash yell loudly.  The only people who would turn down the job are those who already earn more.

“Bob Knight isn’t walking through that door!”  Only the few fans who are married to the past would welcome back the Knight who coached from 1994-2000.  At that point, Knight had lost interest in doing what was necessary to win.  IU didn’t recruit at a high level anymore, and Knight’s behavior had become erratic.  What IU fans would have wanted was what happened at Purdue – an orderly and well-orchestrated passing of the torch from a legendary coach to the next leader who would evolve the culture forward.  That’s not what happened, and Indiana fans have been paying for it since.

Hope that clears things up.