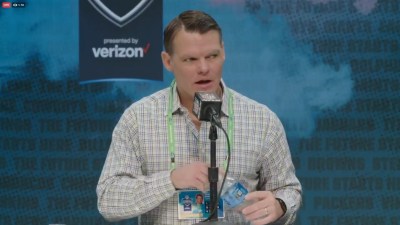 Colts GM Chris Ballard had a lot to say today, but the most important concrete takeaway was the Anthony Castonzo will return.

Colts left tackle Anthony Castonzo will return for the 2020 season.  That was the headline of general manager Chris Ballard’s media availability today at the NFL Scouting Combine, and it’s a big headline.

To not have to worry about drafting a left tackle or signing one in free agency checks a massive box for a team with a few gaping holes in its roster.

The Colts need a quarterback – young or old – to compete with incumbent starter Jacoby Brissett.  Ballard said this about Brissett, “Still need to find out more. At the end of the day, when you go 7-9 you are going to shoulder a lot of the blame. Nature of the position.”  Reasonable assessment – Ballard is always honest and reasonable.

They need a wide receiver or several to shore up a position that was thought to be a strength before injuries ravaged it in 2019.  Ballard said there is a lot of depth at the WR spot in this draft.  That likely translates to Ballard taking one outside the first couple of rounds.

Ballard acknowledged during his postseason media availability that a stud defensive tackle makes the defense go, so look for the Colts to address that position in free agency, the draft, or both.  There are two potentially spectacular candidates in the draft – Derrick Brown from Auburn and South Carolina’s Javon Kinlaw.  One of them may fall to #13 as Aaron Donald did in the 2014 Draft.

Of the quarterback position in this year’s draft, Ballard said, “I think it’s a good group. It’s got depth.”  If you take Ballard at his word, that means he will not be trading up to land one.  He’s not always transparent, but he’s not a big red herring guy, so I always believe him.

Ballard also said WR Parris Campbell has lived at the complex for the last two months preparing his body to bounce back from an injury riddled rookie campaign.  Campbell’s inability to play for long stretches robbed the offense of any dynamism it might have had otherwise.

He added that the time might be right to add a big name free agent.  Chiefs Defensive tackle Chris Jones would fit that profile very nicely.  The Chiefs would love to keep Jones, and will if they can address their limited cap situation before Jones hits the market.  Otherwise, the Colts with their $86-million to spend would make them a front-runner to grab the game-wrecker.

Utah State quarterback Jordan Love is a name that intrigues the Colts and their fans.  Today, when Love was asked if he’s tired of talking about his interceptions, he responded, “If I didn’t want to talk about 17 interceptions, I shouldn’t have thrown them.”  That answer alone moves him up my draft board.

Just because Castonzo is coming back doesn’t mean the Colts will ignore left tackles in free agency or the draft.  Ballard has often said building the offensive line is an ongoing process, and if Castonzo is only committed to one more season it’s reasonable to expect some moves toward evolving into a unit without him.

All in all, today was a good day for Ballard and fans.  A big box was checked, and the Colts have the draft equity and cap room to take shots at addressing the rest.

The free agency period and draft weekend will be fascinating as the Colts try to migrate from irrelevance  to dominance.  To get there, Ballard needs to be as good in signing and drafting over the next two months as he was at talking about it today.