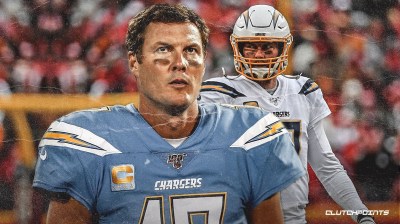 “Indy would be perfect for Philip Rivers.”  “From Bolts to Colts!”  “Rivers flowing to Indianapolis.”  We’ve heard it all during the first few days of rumor mongering at the NFL Scouting Combine.  None of it makes any sense.

The combination of media, agents, free time, and cocktails in Indianapolis causes the occasional odd rumor to gather momentum, and Rivers to the Colts is being repeated through the convention center like it’s a done deal.

Colts GM Chris Ballard has been on the job for only three years, but there has not been one move or comment from Ballard during that time to suggest he would give serious consideration to making Rivers a serious offer to become a stop-gap starter while they groom a long-term replacement for the retired Andrew Luck.

National media embrace the rumor because it’s plausible for some surface reasons – Rivers is a free agent, the Colts are open to an upgrade at QB, the Colts have at least $86-million under the cap, and coach Frank Reich and offensive coordinator Nick Sirianni have both worked with Rivers before.  That’s the math that has led to Rivers signing with the Colts.

Here are six reasons Rivers to the Colts makes no sense:

Given any knowledge of Ballard’s operational thought process, signing Rivers is not a move he would not make.

There is another veteran QB option – an option that makes some sense – an option I cannot in good conscience name.  If Ballard wants to dig deep into his owner’s wallet to hire an old man as a stop-gap gunslinger, there’s a 43-year-old still playing at a really high level despite not having much in the way of weapons at his disposal last season.

That guy would be a definitive upgrade whose team won 12 games last year.  He might be worth whatever it would cost to sign him.

Rivers is not that guy – not close.