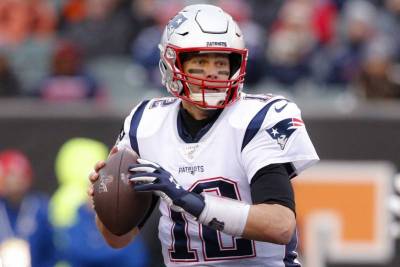 Colts owner Jim Irsay and Brady are the two people who can make that happen, and they can’t even talk to each other for another 11 days.

Signing Brady would be a costly transaction for the Colts, but they have $90-million under the cap to spend. Brady would need to forget about the rivalry being the Patriots and Colts that lapsed a decade ago when Peyton Manning played his last game for the Colts.  At this point , the Colts vs. Patriots is more about laundry than championships, so that’s not problematic.

Brady would also need to move past any residual anger from the Deflategate mess that was initiated by then Colts general manager Ryan Grigson.  Given that virtually the entire Colts front office has flipped in the five years since that sordid affair, this too can also be filed under laundry, unless Brady holds Irsay responsible for Bob Kravitz’s story that started that ball rolling.

There will be many other suitors for Brady – the Titans, Raiders, Bucs, 49ers and Patriots among them – but the Colts appear to be a reasonably good fit with a solid offensive line and young emerging defensive.  There is one potential problem – a lack of offensive weaponry.  T.Y. Hilton has become injury prone, and Zach Pascal is the #2 wide receiver right now.

The draft and free agency could help fill spots, but Brady’s soon-to-be 43-year-old arm only has so many fastballs left in it, so developing chemistry in a multiple season build is impossible.

We can only guess at the boxes Brady and his family want to see checked in order to find a new home, and that assumes he’s done playing for the Patriots.  Ability to win is key, but there is likely a long list of criteria in addition to the potential to win a championship.

Maybe Brady wants to play for the 49ers.  He’s a Bay Area guy, and might want to finish his career at home.  Maybe wife Gisele wants warmth and sun after all these years in New England.  Maybe Raiders owner Mark Davis offers Brady a sick amount of money to be the face of the franchise as the team relocates to Las Vegas.

It’s hard to point to anything Brady might covet that Indy could provide.  Not sure how Tom feels about affordable real estate and breaded tenderloin sandwiches.  Indianapolis is loved by people who live here, not dreamed of by those who don’t.

Hell, we are so clueless about Brady’s methodology in making a choice, we have been reduced to examining in detail Dana White’s Instagram Live show, on which Brady was a guest yesterday, to glean some hint.  He didn’t provide one, by the way.

The one thing we do know is that Brady will play for someone in the NFL next year, and that leaves a maximum of 32 possibilities.  The Packers, Rams, Bengals, Saints, Seahawks, Cowboys, Falcons, Ravens, Texans, Chiefs and Eagles can be immediately crossed off the list.  That leaves 21 teams.  The Colts are one of them.

That’s what we know.  More than that is a guess.

And my guess is that he stays put with the Patriots.  Inertia is a powerful force, and owner Bob Kraft is accustomed to getting his way.