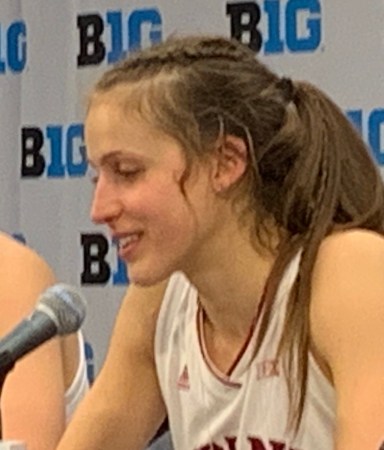 Indiana point guard Ali Patberg smiles when talking about basketball almost as broadly as when she plays.

She never stops talking, shoots well, drives to the basket and finishes, moves her feet, anticipates on defense, rebounds with tenacity, smiles often, makes sure teammates are engaged, and competes every second she is on the floor.

Fans have been waiting for a player on the guys’ team to play like this for more than a generation.

I’ve seen Patberg on TV and was impressed, but watching her today during Indiana’s win against an overmatched Rutgers team at the Big 10 Tournament at Bankers Life Fieldhouse, I was transfixed.

I found myself wishing that I could find a vocation I enjoyed as much as Patberg loves basketball.  She scored 20 in a transcendent first half, but her game is far more than scoring. Indiana was lifted by her tenacity and commitment to team-first basketball, and Rutgers was defeated by their inability to match her spirited play.

Patberg was imperfect, but mistakes were made and forgotten instantly.  Three turnovers didn’t turn into three baskets on the other end because Patberg’s play was immersed in the moment.

Rutgers fans have been seated immediately behind my position on media row for the past two days.  Yesterday, they were loud and raucous.  I wanted them to shut the hell up just for a minute.  Today I got my wish.  Fans were quiet because they were frustrated.

Patberg even beat their fans.

A player for Rutgers was assessed a technical foul in the first half for quibbling profanely about a foul called against her.  When Patberg was the victim of a strange foul call by the same official in the second half, Patberg pleaded her case.  The Rutgers bench and fans demanded a technical be called.  “You called one on ours – call one on theirs!” they shouted.

The ref looked at Rutgers coach Vivian Stringer, and said, “Your player used profanity.  She did n’t”  So Patberg out-argued and outsmarted them too.

The men’s team at IU gets the majority of the headlines and interest in Bloomington, but Patberg and the women’s Hoosiers are far more fun to watch.  The credit for that goes to all the women on the team, but Patberg in particular.

There are nights when the men’s team appears to lack the energy needed to overwhelm an similarly talented opponent.  That is not an issue shared by Patberg and her teammates.  They play hard and together with love for one another – all the time.

The men could learn more than a few things about competing from their female counterparts.  They could learn about how sweet basketball can be when you smile, battle together, execute the offense, and have a great time doing something you are supposed to love.

Tomorrow, the men will play Wisconsin on ESPN at 12 p.m. with a lot on the line, including a potential NCAA Tournament bid.  Patberg and her teammates will play Maryland tomorrow night in the tourney semifinals.  That game will be broadcast on BTN.  Watch both.  Tell me which you found more enjoyable.

This isn’t to crap on the men’s team, but throughout the last seven seasons I’ve missed something about IU Basketball.  I wasn’t sure what it was.  Turns out I found it today when I watched the women’s team.

While shooting, defense, quick ball movement, and rebounding are enormously important, joy can make all of those things come together for a magnificent 40 minutes.  And don’t get it twisted, talent is needed to win too, but without collective joy, what’s the point?

I want to see joy twice tomorrow.  Patberg reminded everyone in Bankers Life Fieldhouse today how much fun basketball can be, and I want more of that.