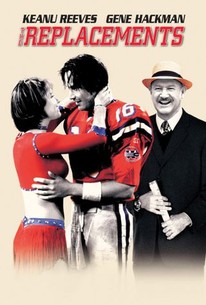 The Replacements was a terrible movie, and a worse reality. Neither NFL owners or players want to re-live it. And they won’t.

It’s been 33 years, but the lesson remains – a union of professional athletes that believe they run the show will learn the painful lesson that there are advantages to ownership.

The NFLPA ratified the new collective bargaining agreement by a slim margin of 60 votes, so there will be football without interruption through the next decade.  Owners will make more money than they can count, and it will be shared generously with players like Colts left tackle Anthony Castonzo who will earn $33-million over the next two seasons for blocking other guys making roughly an equal amount of money.

The alternative was to defeat the agreement, which would have sent the union and owners back to the conference table to broker a new deal from scratch.  It would have been unlikely that the 32 billionaire owners agree to a pact that provides all that exists in the current deal.

In any negotiation, the bankroll available to each side is the key component to outlasting the opposing group.  It’s like Texas hold ’em, the player with the taller stack has a distinct advantage.  Billionaires vs. millionaires and thousandaires really isn’t much of a fight.

In 1987, the players decided enough was enough.  They walked out with great solidarity after week two of the season.  Three weeks later, after the owners rebooted the league with replacement players, the union ran out of money and resolve.  They broke ranks and reported back to work.  The union was broken, and the owners ran the NFL unfettered until the union was recertified in1993.

There was a chance that would happen again if the NFLPA declined this agreement.  There is one word billionaires rarely hear, and loathe more than any other.  They tend to hold those who dare utter this word to them culpable and punish them for their impudence.  That word is “No.”

By ratifying this version of the CBA and not pressing their luck, it’s very likely the players saved themselves a year of misery across a conference table from a quarry with a virtually inexhaustible stack of chips.  They may have missed game checks and been left with a substantially less agreeable deal when an agreement was finally forged.

The NFL is a money printing machine with amazing popularity.  Owners make a lot of cash.  Players earn millions.  The only thing that can derail this remarkably stable financial apparatus is greed, and the players were just 60 votes from getting dangerously greedy.

Owners and players need each other, but the players need the owners just a little bit more.  We learned that in 1987.