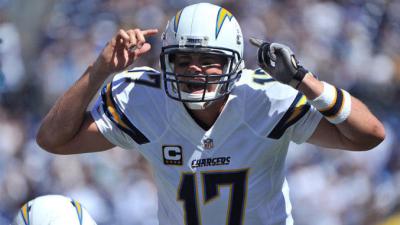 If you think Chris Ballard is genuinely interested in Philip Rivers, you need to use your head – or he does.

Philip Rivers to the Colts?  Those rumors cannot be real.

Reports keep linking the 38-year-old former Chargers quarterback to the Colts, but I can’t twist the notion around in my mind to where it makes sense.  Colts GM Chris Ballard just doesn’t make moves like this.

Rivers is going to be 39 in December, hasn’t been to a Super Bowl in his 16-year career, and will cost $20-million or more per year.  He ranked #17 among QBs in 2019, according to Pro Football Focus, right between Carson Wentz and Baker Mayfield.

How about this for a stat that should dissuade Ballard from the belief Rivers makes the Colts an immediate contender – the Chargers record over the last decade is 77-83.  He posted double digit wins once (2018) during those 10 seasons, and Rivers never missed a start.

Everyone points to the familiarity between head coach Frank Reich and Rivers as a reason for the supposed reciprocal interest between the Colts and Rivers.  During the three years they were together (Reich was QB coach in 2013 and offensive coordinator in 2014 & 2015), the Chargers were 22-26, Rivers led the NFL with 18 picks in 2014, and he was sacked an average of 35 times.  Familiarity like that doesn’t motivate a reunion.  This isn’t Paul Simon & Art Garfunkel – it’s Simon and CeeLo.

People say Rivers needed an offensive line and weapons in 2019 – that his numbers reflected the quality of the 10 other guys he took the field with.  Okay, fair enough, but damn, over the last 10 years, his teams were under .500.  Doesn’t Rivers deserve some of the blame for the Chargers’ entrenched mediocrity as he has aged?

He’s better than Jacoby Brissett was when he came back from injury, but so is every starting QB in the NFL.  There is no question Ballard needs to elevate passing efficiency for the Colts, but Rivers is not the sealant to plug that hole.

Owner Jim Irsay mentioned a few weeks ago that prior to free agency and the draft the Colts might throw out a few red herrings to distract the media and rivals.  While I always believe Irsay trusts his own message, I rarely do.  He gets excited and says things without much regard as to whether they will come true or not.  Maybe this is the red herring that Irsay threatened.  I hope so.

Whatever the explanation, I cannot believe that Ballard would seriously entertain the thought of overspending for an aging middle of the pack quarterback without any special skills.

Rivers was a competent quarterback who ended two Colts seasons over 10 years ago.  He was good.  THAT Philip Rivers would look pretty good in a Colts uniform.

What’s left of this Rivers should drip somewhere else.