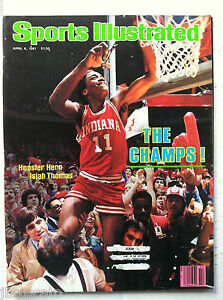 As an Indiana University freshman in 1980-1981, I was treated to an uneven season of basketball from what will always be my favorite team.

The beginning of the season was difficult to watch – the end was glorious.  The worst was a 66-60 loss to Texas-Rio Grande Valley, and the best was the national championship game against North Carolina.  In between came enlightenment.

What I know about basketball, I learned during that 1980-1981 season as very talented players led by an exceptionally smart coach flirted with selfless perfection and intellectual dominance.  I’m not sure this was the smartest basketball team to ever play, but it was close.

Basketball is a weird game in that it dazzles with individual excellence, but ultimately rewards player discipline as they deny selfish impulses.  Functioning well as a team requires talking and listening, shooting and passing, and investing in the many at the expense of the one.

Once Indiana figured that out, the Hoosiers soared like very few teams before or since.  They were led on the floor by Isiah Thomas, a point guard whose superb talent was exceeded only by his desire to win.  Ray Tolbert was a team-first big whose work as a mentor for sleeping giant Landon Turner became critical as the season progressed.

Randy Wittman and Ted Kitchel were tenacious competitors and excellent shooters who knew when to listen to Knight, and understood perfectly when to ignore him.

Steve Risley and Jim Thomas were role players who knew what was expected of them and consistently delivered.  Chuck Franz, Glen Grunwald, Phil Isenbarger, Steve Bouchie, and Tony Brown were noble in their sacrifices and contributions.

This is a team that ended the non-conference portion of the season 7-5 and appeared to be one of those groups that simply did not fit together.  Talented players without collective commitment will never win consistently.  This is what we’ve seen and been frustrated by from Indiana teams since 2013.  It’s what got Tom Crean fired because he could not recruit to what IU fans demand.

This group of Hoosiers figured out how important commitment and fit are, and they soared as they became a true team.

IU’s run through the NCAA Tournament was historic with wins of 35, 15, 32, 18 and 13 points.  No team challenged them.  It’s true that the road was made smoother by Kentucky and DePaul losing in the first round and by hosting the regional finals at Assembly Hall, but Indiana won its fourth banner by becoming a selfless machine that grew quickly to understand the game and execute it relentlessly.

This was Knight’s best work as a coach.  According to those who played on this team, he handed the keys to Isiah in February and trusted him to drive.  He also allowed teammates to try to get to a very hard to reach Landon Turner.  Tolbert’s work to get Turner to devote himself to accepting the responsibility of being a great teammate was instrumental in his explosion toward greatness.

This team was mature enough to get the best from Knight without a debilitating amount of his worst.  Imagine what would have happened if Knight kicked Turner off the team – as he did to so many who shared Turner’s malaise.

Fans don’t get a chance to watch teams evolve into dominating champions very often, but magic happened in 1981, and all of us on campus then got to take that joyous ride with them.