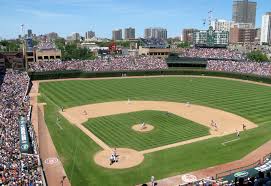 To a five-year-old’s eyes in 1968, this was the most beautiful place in the world. Almost 52 years later, it still is.

Every year beginning in 1968, Dad would take me out of school on a spring afternoon to go to a Cubs game at Wrigley Field.  Back then, the Cubs only played day games, so that was the only way to see them during the week.

Cubs owner Phil Wrigley mandated that 22,000 tickets went on sale the day of every game, so there were always tickets available for those who woke up with an inkling they might want to see the Cubs that afternoon.

On April 16, 1968, Dad drove us down to Wrigley, a place I had only seen on our black and white TV, and as we headed east on Addison from the Kennedy Expressway I couldn’t wait to get my first glimpse of the historic ballpark.  Every block, I asked, “Are we close?”  Dad nodded in annoyance.

Finally, through the trees, the red marquee that faces the intersection of Addison and Clark Streets was visible, and my heart exploded.  It’s hard to explain how thrilling it it to see in-person an iconic site that had only been available on TV.  To a five-year-old, it’s like rolling up to the pearly gates of heaven.

We parked in the lot adjacent to Wrigley, just across Clark, a waited in line for tickets.  Dad popped for a couple of box seats 10 rows up from the Cincinnati Reds on deck circle on the first base side.  Back then, the most expensive tickets at Wrigley cost $3.50, so it wasn’t a financial hardship to sit up close.

Walking up the stairs that leads to the seating area, I was totally unprepared for the beauty of what I would see moments later.  It never occurred to me that the grass at Wrigley was green.  It was gray on TV, so I assumed the grass was gray.  The iconic scoreboard also appeared to be gray on TV.  When I reached the top of the steps, I was surrounded by a green so vivid I was overwhelmed.  I stopped until the slack in the arms that connected my dad and I as we held hands snapped taut.  “Cmon,” Dad pleaded.

We bought a scorecard and sat in our seats.  The game was 45-minutes from first pitch, but that was the way Dad lived – arrive early, leave earlier.  He handed me the scorecard and pencil, pointed to a couple of guys in Reds uniforms, and told me, “Go ask that guy to sign the card.”

Because there were two Reds standing next to the dugout, I went toward the player without a crowd around him.  The Reds player signed his name and I ran happily back to my seat.  Dad was laughing.  “Pete Rose and Fred Whitfield are signing autographs, and you go to Whitfield.”

That’s a very solid example of how my relationship with Dad worked over our 40 years together.  Dad told me to do something, I did my best to comply, and the result was less than perfect.

The National Anthem played, we stood, and I sang as loudly as I could.  We had just learned the lyrics from Mrs. Courtney in Kindergarten, so I was eager to sing loudly enough that my mom could hear me as she watched on TV at home.  Sadly, despite my efforts, she was unable to discern my voice from the others who joined the chorus.

Cubs baseball was not the juggernaut of popularity in 1968 that it is today.  The Cubs had been a bad team since 1945, and while hopes were high for 1968, fan interest drove only 10,763 fans to Wrigley on that day.

Fergie Jenkins started for the Cubs, but he didn’t have his best stuff and only lasted three innings.  The Cubs fell behind 5-0 after the Reds scored two in the top of the third, but exploded for seven in the bottom of the frame.  Ernie Banks’ two-run double was the most exciting moment of the inning.  He followed that up in the fifth with a leadoff home run.  Big day for Mr. Cub, who was my favorite player.

Banks always smiled, was skinny like me, and seemed to be just about the smoothest human being I had seen do anything, so I loved him over Ron Santo, Billy Williams, Jenkins, and Don Kessinger.  To see him whack it like he did that day was a treat.

I was having a great time, but Dad was ready to hit the road after six innings with the Cubs leading 8-6.  This was the first of many Cubs games I would attend with Dad without ever staying around to see a seventh inning stretch.  Avoiding traffic was much more important to Dad than watching an additional three innings of baseball.

My only other memory of the day was Dad being upset that the parking lot attendant allowed a car to block our path to the exit.  Dad’s lack of patience, which was legendary, caused him to get creative in getting from the lot to Addison Street.  I don’t recall any contact between our car and those belonging to fans who chose to stay beyond the sixth inning, but I can’t swear he didn’t physically move obstacles that stood between Dad and open road back to Lake Bluff.

Every time I return to Wrigley Field, I visit the ramp Dad and I scaled on that day more than 50 years ago.  I walk up the steps and revel in the jarring embrace by the various shades of green.  The vista has changed over the years with the video screens and hideous billboards, but enough remains to make the wave of nostalgia and love for my dad so thick I stand in awe for a minute before gathering my senses and returning to present day.

I loved the Cubs before April 16, 1968.  I loved my dad before that date too.  But on that day, those two loves merged in a time and place that continues to call me back to remember and visit – just like every father’s son who took his hand, walked up a few steps, and had that perfect green grass and blue sky seared into their hearts.