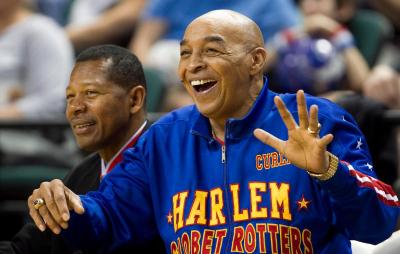 Curly Neal and his ever-present smile will be forever remembered by basketball fans – especially those of us privileged to have met him.

Kids in the 1970s knew two of the Globetrotters – Meadowlark Lemon and Curly.  Meadowlark was hilarious – a nonstop cascade of basketball comedy.  Curly had a shaved head and smiled all the time.  Both were featured prominently on Scooby Doo episodes and the  strange Saturday morning cartoon of their own that aired in 1970.

Curly came to Indianapolis in 1994 as an ambassador for the Globetrotters to promote a game.  He stopped by the WIBC Radio studios for an interview on the morning show.  As the station’s executive producer, I took it upon myself to meet famous guests in front of the building and bring them up to the third floor for their appearance.

Okay, so these WIBC’s guests were 20 years or more past their window of popularity and relevance, but it was cool to spend 15 minutes with them before their interview and walk them back to the parking lot so they could move on to their next media stop.  Those conversations were fun – for me – especially the one I had with Curly.

Curly was one of the nicest people I had the chance to meet.  He was friendly, funny, and gracious.  We talked a little about basketball and the Globetrotters, but he kept asking me questions about media and my life.

At the end of our little talk, Curly said, “You gotta come to my party downtown tonight.  I’m gonna have a rager.”  This was the first time I heard the term “rager,” and it kind of intimidated me.

“Thanks, but I have a thing with my wife and son tonight, so I can’t make it,” I reflexively told him.  That was technically true, as I had “a thing” with my wife and six-year-old son every night.  We ate dinner, and enjoyed each other’s company.  That’s a thing, isn’t it?

I’ve always regretted not going because a party with Curly Neal and his friends is not the kind of event I get invited to everyday.  In fact, I’ve never been invited anything like it before or since, and my imagination runs in a million directions every time I wonder about what it might have been like.

It could have been filled with wild women, loud music, and endless dancing.  Or, it could have gone in a bunch of other directions, many not my cup of tea.  Regardless of what Curly meant by “rager,” it would have been a great memory and fun story.

Instead of embracing whatever weirdness, wildness, or tedium existed in Curly’s world on that night, I refused my one-time ticket to join it.

Curly made countless people laugh as he entertained by playing basketball for the Globetrotters, and lived what seemed to be a very full and friendly life.  That’s a hell of a legacy no matter what I missed by staying home on that night in 1994.

One thought on “Curly Neal passes away – great player, great smile, and a party invitation I refused”