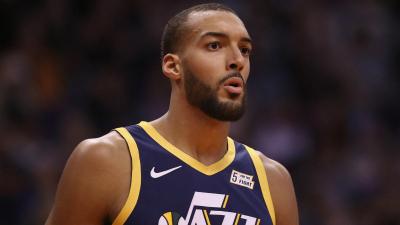 Rudy Gobert might be the most unlikely hero of the fight against the Coronavirus.

Sitting at the Big 10 Tournament as Indiana played Nebraska, The Athletic’s Bob Kravitz leaned over and showed me a tweet that Rudy Gobert of the Utah Jazz tested positive for the Coronavirus.  In that moment, we both knew the world changed.

A few minutes later, the NBA suspended its schedule.  There was an audible buzz at Bankers Life Fieldhouse, and a strangely enthusiastic ovation for famed halftime act Red Panda when she completed her act – flipping bowls onto her head while riding a unicycle.  It was as though the crowd felt what was coming because of the positive test of the Jazz center.

The next day, conference tournaments were canceled, the NCAA Tournament was canceled, the NHL suspended its schedule, and Major League Baseball closed spring training.

The end of the sports schedule as we know it was an immediate and jarring alarm that told us life in America needed to change immediately and radically.  Many stayed home and practiced social distancing even before the orders came from the president, governors and mayors.

In that way, Gobert’s positive test had a positive outcome because it brought into immediate focus the need to take the Coronavirus very seriously and bring down the curtain on mass social gatherings, like sporting events.

Gobert actually did America two favors as this pandemic became dangerous and disruptive.

Prior to his positive test, Gobert purposefully touched and rubbed the belongings of teammates.  That was reckless and foolish, but served as a dangerous example when it was discovered teammate Donovan Mitchell tested positive.  Gobert gave us a villain – and we always need a villain to ingrain exactly the behavior we do not want others to emulate.  It’s like your drunk Uncle Chuckie, who your parents would point to at holiday dinners and say, “Don’t grow up to be like him.”

Gobert differed from Uncle Chuckie in one important way.  He acknowledged his error.  Gobert’s statement reads, “I’m going to start by saying thank you to all the people who have been supportive and all the positive energy, it really means a lot.  As for myself I’ve been feeling better every single day, thanks to the healthcare people of Utah, Oklahoma City and all the people around me.

“As you already know, I just want to remind you to keep washing your hands, try to avoid touching your face and try to avoid making unnecessary contact with people. It’s all about protecting yourself and people around you. I wish I would’ve taken this thing more seriously and I hope everyone else will do so because we can do it together. Take care, and stay safe.”

So there’s a positive example of a reformed moron growing to understand that his selfish and dismissive behavior had a serious cost that had the potential for fatal consequences.  It would be nice if more people owned their mistakes, as Gobert did.

This has been a busy month for Gobert.  The positive test was a signal flare to America and the world.  His stupidity in the Jazz locker room had the potential to throw gasoline on that flare.  Then he acknowledged his error.

The truth is Gobert saved lives both through his positive test and dopey indifference to the lives of his teammates.  Then he showed grace with what seemed to be an honest admission of stupidity wrapped in guidance toward positive behavior.

Gobert is an unlikely and maybe undeserving hero in the fight against this damn virus.