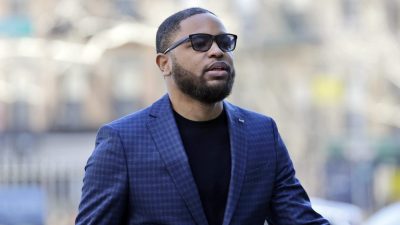 Christian Dawkins is a pimp with tight lips, which makes him the closest thing to a hero in HBO’s documentary “The Scheme.”

You get to a certain level of life experience, and no level of stupidity surprises you anymore.  HBO’s documentary “The Scheme” debuted last night, and the idiocy and greed in college basketball was so thick among all participants that I was stunned by it.

Christian Dawkins was a runner for a sports agent who built relationships with high school basketball players and their families.  His arrogance and greed drove him into a business partnership with an undercover federal agent named Jeff D’Angelo.  His goal was to build bribery cases against coaches.

In the end, Dawkins refuses to roll over for the feds and offer testimony based upon all he knows – which appears to be substantial.  His refusal to save himself from prosecution is the most courageous and decent act chronicled in the two-hour film.  That tells you a lot about the people and acts shown in this miserable indictment of college basketball and humanity, and an FBI investigation of it.

These people are entirely unencumbered by decency or intellect.

Dawkins shows himself to be greedy and stupid.  The feds are idiots for not understanding how supposed corruption in college basketball works.  The NCAA remains hypocritical for refusing to adjust its rule book to acknowledge the realities of how college football and basketball works.  The schools are amoral for accepting extreme amounts of sponsorship dollars from shoe companies without copping to the level of influence that cash buys.  Fans are morons for buying into the sham ideology of amateurism.

The principle belief system of the United States of America is capitalism.  Value yields compensation.  That’s not just the way business works – it’s the way EVERYTHING works in this country.

The NCAA does not allow value-based payments to be made to student-athletes, so shoe companies, agents, boosters, and (according to a wiretapped phone conversation between LSU’s Will Wade and Christian Dawkins) at least one ballsy head coach fill that vacuum.

The NCAA treats soon-to-be football and men’s college basketball professionals like field hockey players, so coaches and administrators get paid millions.  Because America abhors a value vacuum, the shoes stepped in to compensate athletes.

The well-produced documentary offers very little new perspective.  Dawkins is a ravenous manipulator of young athletes and their families.  The NCAA is a glutinous organization that pays executives millions because it has turned a blind eye to rules violations for 70 years.  The FBI tried to build a case against college basketball coaches that was built upon a foundation of ignorance.

I kept waiting for a virtuous person or organization to ride to the rescue, but I knew this story would have no hero.

The only productive purpose of the film is that it might make enough people angry that public outrage might light the fire of reform within the NCAA.  Seems unlikely given that anyone with a passing knowledge of college sports has already been given enough fuel to light a fire of fury.

If anything, we have learned through these various sordid episodes that the public will move on to the next story eventually, and all will be forgotten and forgiven if two things happen – a program wins, and humiliating episodes are not stacked atop one another.

Louisville had to act against Rick Pitino, not because Brian Bowen’s dad was paid by assistant coach Kenny Johnson in front of the Galt House, but because that happened after Katina Powell spilled the beans about the basketball program paying for whores who serviced players, recruits, and fathers of recruits at parties inside the basketball dorm.

Wade and Miller will skate because, despite wiretapped conversations, many programs benefit from shoe companies paying families of valuable recruits.  If Miller and Wade are held accountable for a routine practice, where does that accountability stop?  How many coaches would be tossed?

We can choose to see the greed sewn into the fabric of college basketball and football in one of two ways.