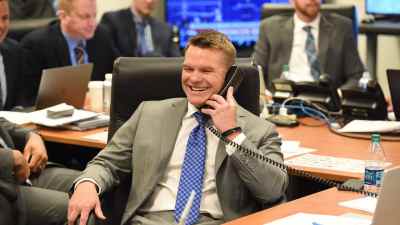 Colts fans hope Chris Ballard will be smiling this broadly in three weeks as the NFL Draft begins.

This is no time to be negative about sports.  Coronavirus news is crazy right now, and people need a reason to believe that brighter days are ahead for their favorite sports teams because we still have a couple of weeks before we’ll know just how bad the real world stuff will get.

But that doesn’t mean we should ignore reality and assume that absolute best case scenario about everything related to the Indianapolis Colts.

Fans and media in Indy are talking about the Colts as though the AFC South belongs to them.  Colts GM Chris Ballard has been busy this offseason signing free agents, making a big trade, and getting ready for the NFL Draft just three weeks for tonight, but has that work really made them a division favorite?

The offensive line returns intact.  That’s good, but it isn’t quite like this is a crew that never misses a block.  Mark Glowinski is an average starting guard at best.  Braden Smith is a good right tackle.  Ryan Kelly, Quenton Nelson, and Anthony Castonzo are as good collectively as any center, left guard, and left tackle in the NFL.

Offensive weapons will need to utilize that line to move the ball and score points.  Philip Rivers will be the starting quarterback instead of Jacoby Brissett.  This has fans and some media excited, but I can’t figure out why.  The 38-year-old led the Chargers for a 5-11 record, threw 20 interceptions, and was sacked 34 times in 2019.  “Anyone can have a bad year,” you say?  True, but Rivers is 77-83 over the last decade, posting double-digit wins just once in that time.  He led the NFL in picks twice and has been to the playoffs once in the last six seasons.  I keep squinting and standing on my head as I watch Rivers’ tape, but I’ve yet to see him look like a potential Super Bowl level quarterback.  Maybe that’s because he’s never played in a Super Bowl.

The best thing about the receivers Rivers will throw to is that we don’t know who they will be yet.  T.Y. Hilton is a gutsy veteran for whom injuries have become a problem over the last two years.  In 2019, Hilton posted career lows in almost every meaningful stat, including games (10), catches (45), and yards (501).  The rest of the WRs are a hodge lodge of mediocres and injured guys.  There is still plenty of time before the season to draft or sign upgrades, so judging Colts receivers is premature.  No way Ballard rolls with this position group as it’s currently structured.

Running backs aren’t bad, but they aren’t a roster strength either.  Marlon Mack was good last year with over 1,000 yards and a 4.4 yards per carry average.  Nyheim Hines is a weapon as a receiver.  Jordan Wilkins takes a long run to the house once or twice a year.  If you ranked the Colts RBs against the rest of the NFL, they would be in the top half of the league, but not by much.

Jack Doyle is the tight end.  Mo Alie-Cox is still around too. This position will be upgraded before the season begins.

An NFL offense needs to know where it can get a few yards to score or moves the chains, just as an NBA offense needs a guy they can isolate and get late scores.  The Colts don’t have that guy. When the Colts were rolling in the 2000s – a decade in which they played in two Super Bowls – they had Peyton Manning, Marvin Harrison, Reggie Wayne, Dallas Clark, and Edgerrin James among others.  No one on the Colts roster today comes close to the dynamism of those players.

The defense picked up the DT Ballard believes it needs in DeForest Buckner.  We have been told many times, the three-technique makes Matt Eberflus’s defense go.  Buckner is a prototype three technique, but not a game-wrecker like Aaron Donald.  DE Justin Houston posted a team high 11 sacks, but Jabaal Sheard is a free agent and unlikely to return.  Veteran corners Xavier Rhodes and T.J. Carrie have been signed, and the linebackers return intact.

While Darius Leonard is a known commodity, whether the defense can drive this team to success will depend upon the health and development of Kemoko Turay, Ben Banogu, Bobby Okereke, Malik Hooker, and Rock Ya-Sin.  That group becomes dynamic, and the Colts might be as good as fans predict.

Special teams are an unknown because no one knows today whether Adam Vinatieri will return.  Rigoberto Sanchez is a hell of a punter, and that’s a good thing, but this aspect of the roster can’t be evaluated until we know who the kicker will be in 2020.

I’m not saying the Colts are going to suck, but if you look at the 7-9 from 2019 and the additions and subtractions made to this point in the offseason, there is no logic to drive the belief the playoffs are in their immediate future.

There is still plenty of time and a draft to get things squared away, but right now the Colts are not a division winning football team.