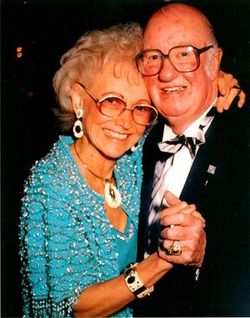 Jack Brickhouse and his wife dancing.

As an intern in the sports office at WGN Radio in Chicago, I worked with Chuck Swirsky, Randy Minkoff, Wayne Larivee, and Dwayne Staats.  It was a great place to learn among broadcasters who have had long careers doing what they love.

My hero in the sports broadcast business was Jack Brickhouse, with whom I probably spent more time as a kid than any man other than my dad.  He told the stories of roughly 150 Chicago Cubs baseball games on WGN-TV each season from long before I was born until after I graduated high school, and I watched at least parts of nearly all of them.

Brickhouse was a homer for the Cubs and a pro.  He was great at weaving historical tidbits he witnessed into broadcasts, and punctuated every home run hit by a Cub with his signature “Hey! Hey!”

When Brickhouse walked into the sports office at WGN-Radio on a Thursday afternoon in 1988, I stopped in my tracks and gawked.  There he was – the guy who narrated and inspired my love for baseball and broadcasting – and I had no idea what to say.

Brickhouse looked exactly the same as he did when he retired seven years earlier, and he was holding a cake box.  There was one unsettling difference.  He had recently grown a mustache, so I decided that would be my icebreaker.

“Mr. Brickhouse, my name is Kent Sterling,” I said.  “Love the mustache!”

He smiled, and replied, “You know I just grew the thing.  Do you think I should keep it?”

“I makes you look 10 years younger.  You’d be crazy to shave it,” I told him.  One thing I had learned upon opening conversations with strangers is that if you pay them a specific and effusive compliment, they never dismiss or argue.

Brickhouse handed me the cake box, and said, “Kid, can you find a freezer for this.  It’s a surprise ice cream cake for my wife.  Her birthday is in four days, and I need it to be kept in a freezer until then.”

I told him that I would be happy to put it someplace cold and safe until he came back for it.  “Thanks, kid,” he said.  Brickhouse called everybody “kid,” because he was terrible with names.  That was fine by me.

So there I was holding Jack Brickhouse’s wife’s ice cream birthday cake without any inkling what the hell I was going to do with it.  I had never seen a freezer at Tribune Tower, but there had to be one somewhere.  I needed to find it very quickly or the beautiful cake would melt into a puddle of goop.

I asked engineer Ben Cortez if he knew where a freezer was.  Ben was my go to for all questions.  He was very patient with interns, so I knew I would at least get some kindness if not information.  Ben said he thought there might be one in back near the talent offices.

I passed Dr. Milt Rosenberg’s book-lined office, and there he was, reading like always.  Rosenberg, the University of Chicago professor and host of Extension 720, was incredibly intimidating.  A man with his voracious appetite for information would never tolerate a question from an insolent intern carrying an ice cream cake.  He would likely ask why I agreed to care for Brickhouse’s cake without first knowing where a freezer was.  So I spared myself the lecture.

Roy Leonard’s office was next, and as always, he was very helpful.  Not only one of the best talk hosts in Chicago radio history, but one of the nicest guys too, Leonard told me exactly where to find a freezer.  Knowing how radio people gravitate toward free food – especially frozen treats – I wrote a note threatening bodily harm if anyone disturbed to contents.  The cake belonged to Brickhouse, and no one better mess with it.  With Brickhouse’s cake safe, I returned to the sports office to find Brickhouse on the phone.

“Okay, just don’t get too far out ahead of me,” Brickhouse said as he hung up the phone.  He then told me, “Going to meet my wife at Harry Caray’s Restaurant for a few drinks.”  This was a stunning moment of real life banter with a broadcasting icon.  I had always wondered what Brickhouse’s life away from the Cubs was like.  Seemed it was a lot like everyone else’s.

I told him the cake was safe in a freezer, and all he had to do was tell me when he would return to pick it up and I would make sure I was there to get it for him.

He came back the following Monday. I grabbed the cake, intact, and presented it to him.  “Thanks, kid!” he said.

Sensing a moment where I could say something dramatic that would convey my admiration for all those afternoons and nights he spent with me during Cubs games, I said, “No.  Thank you.”

Brickhouse cocked his head, looked at me, said. “Yeah, Okay,” and hustled down the hall likely consumed with the fear the cake might melt before he got it home.