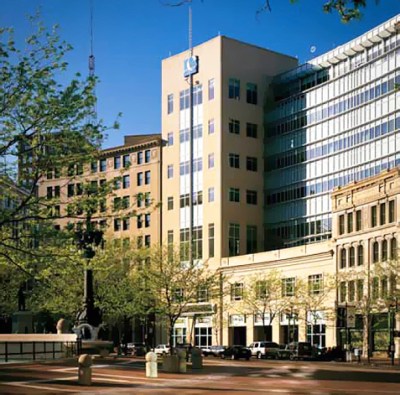 The Emmis Building in downtown Indianapolis has been the site of great radio for more than 20 years, but in 1999 it was also the hub of an all-time great party.

The grand opening celebration of the Emmis Worldwide Headquarters in downtown Indianapolis was a hell of a week long party.  People walked through the building night after night, enjoying great food, tall drinks, and each other’s company.

The final afternoon and night ended with a concert at the War Memorial with Kool & the Gang as the openers and Rod Stewart as the headliner.  Buses filled with staff and guests ran the three blocks from the Emmis Building north on Meridian Street on a regular basis, and another 50,000 fans filled the area for the free show.

Indianapolis celebrities enjoyed themselves along with Emmis employees.  In the lobby of the building on the Saturday of the concert, Colts tight end Ken Dilger, who did a weekly phonier with the WIBC Morning News, was joined by Colts quarterback Peyton Manning and offensive lineman Adam Meadows.

I told Julie that we needed to be ready to hop on the bus when Jeff Smulyan did.  Jeff founded Emmis and still runs the company.  He wrote the check, so he would have unfettered access to the show.  Staying close to him would put us in the eye of the hurricane.  He’s a great guy, so he would likely enjoy our company rather than be annoyed by it.

Sure enough, when Jeff got off the bus (with us right on his heels), he walked straight backstage.  Security waved him through and we were close enough that we weren’t stopped.  Kool & the Gang were playing their hits, and we were 20-feet from the band – stage right.

There were a couple of very serious looking security guards positioned to keep the crowd behind the barricade, and after the band finished I talked to them about how they did their job. They were nice guys whose eyes darted around as they spoke.  These were the same types of guys I tried to avoid as a high school kid trying to sneak into this very kind of event.  Fun to be on the same side of the rope as a credentialed adult.

As I was in the middle of a sentence, the security guys changed position quickly.  Seconds later Rod Stewart exploded out of a trailer positioned a few feet from us.  He sprinted past us, bounding up several steps and leaped onto the stage.  The crowd roared, and I heard a man’s voice call my name.  I thought that was odd, but then saw Dilger waving about 10-feet from the barricade.  He motioned that he wanted to come backstage with Manning and Meadows.

As Stewart’s first song began, I grabbed one of the security guards and pointed at the three Colts.  “These three, they can come back.  Only those three!”  This was 1999, and Manning was coming off a 3-13 rookie season during which he threw 28 picks, so he wasn’t the beloved media icon that he is today.

Why I thought I was the keeper of the backstage keys, I have know idea.  I’ve always been good at getting into places I don’t belong, so maybe I repurposed that skill into that of an ad hoc authority figure who could bark orders to allows others I chose to enjoy the fun.

The guards nodded, and Dilger, Manning and Meadows were allowed through the barricade.  They availed themselves of the ice cold refreshments that filled plastic trash containers, and danced for two-hours of Rod Stewarts greatest hits.  I don’t want to tell tales out of school about Manning’s dancing, but as composed in the pocket as he was, imagine the opposite.

Stewart’s show ended, security guards cleared a path as the sweaty rocker returned to his trailer, and the rest of us dispersed into the night.  Manning went on to win two Super Bowls, Dilger signed a huge (at the time) free agent deal to play in Tampa, and the Emmis Building became a place where the best radio in Indianapolis continues to be produced.