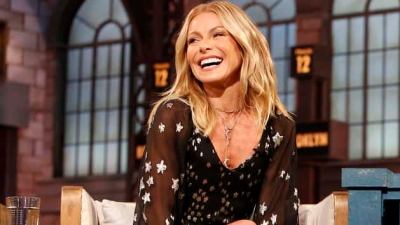 Kelly Ripa chose to stand next to me, bend over, and show me her boob – or she didn’t notice me standing alone in the middle of the Magic Kingdom or DisneyWorld.

Media junkets to DisneyWorld are among the very best perks of working in radio.  Flights, food, lodging, and park passes all comped, and all you have to do is the show you would be doing anyway.  Sweet!

Because WIBC was an ABC affiliate (ABC and ESPN are owned by Disney) and we met their demographic needs, we were invited every other year or so for an anniversary or attraction opening.  Disney always treated us exceptionally well, and staff looked forward to every trip.

One very cool aspect of doing a morning show from a Disney park is access to the park long before the park opens to the public.  There is something so unique about a place that is normally packed with people being almost completely empty.  Walking through the Magic Kingdom at 5:00 A.M. when the WIBC Morning News started is similar to being at Wrigley Field or broadway theater the morning of a game or performance.  It’s a completely different vibe – like the park is asleep, just waiting for visitors to awaken it.

Our show ran from 5a-9a, so the workday was done before the park even opened, and on our last day of the last trip we made to DisneyWorld, the show aired from very near the entrance to Space Mountain.  Roughly 100 yards away, I could see a crowd gather as our show was set to end.

I walked halfway to the crowd to get a better look at what was going on.  I stood alone in the middle of a paved expanse and watched, trying to figure out what show was about to begin.  A woman left the set and began walking toward me.  As she got closer, I recognized her as Kelly Ripa, the co-host of ABC’s Live with Regis and Kelly.

Ripa kept coming closer and closer to me until she stood to my right, almost shoulder to shoulder.  I found this a little unsettling as I was completely by myself.  No one else stood within 40 yards of me in any direction.  Ripa never made eye contact or acknowledged me as she fixed her hair.  This felt like the kind of interaction you might see in a spy movie where one operative approached another, use a code phrase to establish contact, and then adjourned to a park bench for a clandestine conversation.

Not knowing whether it was more appropriate to stare at her or avoid looking at her completely, I split the difference by looking vaguely toward her.

Then Ripa bent over to adjust her shoes.  She was wearing a loose fitting pullover blouse, and the looseness became more pronounced the farther she bent.  I glanced, and there it was – her entire right boob dangling free in clear view from my high angle.

Four thoughts raced through my mind.  The first was the most obvious – wow, that is Kelly Ripa’s boob!  Second, was this some kind of odd celebrity method of trying to pick up a guy?  Is it possible that in the celebrity world, there was a flash a boob code that had been unshared with rabble like me?  Third, was I a creep for looking?  I mean, it’s not like I was hiding.  I was in the middle of a theme park in clear and obvious view, and Ripa walked up next to me – not the other way around.  Fourth – maybe I had developed the power to be invisible.

Her shoes adjusted and hair in place, Ripa walked quickly back to the set, and I was left to ponder what the hell just happened and why.  I’ve never come up with a satisfactory answer.  Two explanations could be eliminated – Ripa was not trying to pick me up and I had not assumed an invisible form.  Also, I didn’t feel like a creep because I did nothing to initiate my view of her right boob, and let’s face it, if you have the opportunity to see Kelly Ripa’s boob without being a weasel or peeping tom, you do it.

It was just another weird moment in a lifetime of weird moments with a woman whose motive in showing me her boob will forever remain unknown.