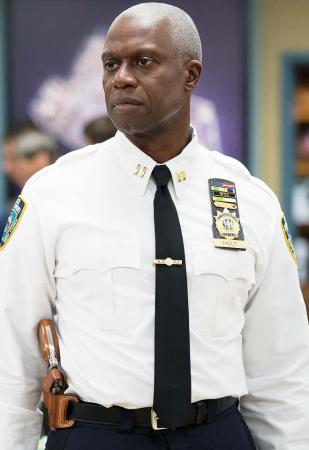 Andre Braugher is always supremely confident as an actor. But with me in an elevator, he was bamboozled.

There are few things over which I can claim an absolute mastery.  Elevator conversations are one of them.

I can talk to anyone at anytime in an elevator, as long as the building isn’t over 60 stories tall.  The key is a solid opener that leaves an opening for a coherent response.  The response that I try to elicit will give me an opportunity for a nice close.  The elevator door opens, and the conversation ends.

I have never had a bad conversation in an elevator.  Not once.

The fun is that you never know might get on when an elevator stops to pick someone up.  It’s like welcoming a mystery guest onto the set of a talk show where the conversation will only take 30 seconds.

In Washington DC for a National Association of Broadcasters event to receive an award on behalf of WIBC Radio, I hopped on a hotel elevator to get to my room on the fourth floor.  The door began to close, when a hand reached in.  The doors re-opened and actor Andre Braugher hopped on.

Braugher stars as Captain Ray Holt on the NBC sitcom Brooklyn Nine-Nine, and came to fame as Frank Pembleton on Homicide: Life on the Streets.  He’s a Chicago native, who is often mentioned on the short list of the greatest actors the city has produced.

“Andre,” I said in a familiar way – kind of like you would to a business acquaintance – as he moved to the opposite side of the elevator.

“Hi,” said Braugher without making eye contact.  It wasn’t dismissive, but certainly not friendly.  He hit the button for the third floor.

The door opened as the elevator reached the third floor.  Braugher exited.  As he passed the threshold, I said loudly, as though I was introducing him on stage, “Chicago’s greatest actor!”

Braugher took another step, stopped, spun, pointed, and said, “I DO know you!” as the door closed behind him.

Of course, he didn’t know me.  I recognized him, knew he was from Chicago, and parlayed that slice of trivia into a moment of confusion.  Sure, I could have vaguely complimented Braugher like some insipid fanboy, but what’s the fun of that?  Being yet another in a long line of annoying knuckleheads making him uncomfortable with praise offered in a tightly confined space holds no interest for me – or him.

My way, he might have spent the next hour trying to figure out how he knew that strange guy in the elevator.  That’s how you craft a fun moment out a meaningless encounter.