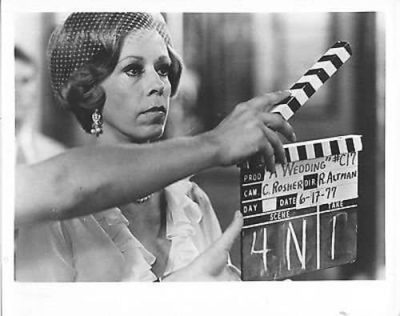 Carol Burnett’s performance for fans in Lake Bluff and Lake Forest was at least the equal of her work in 1978’s “The Wedding.”

In 1977, the film “A Wedding” was shot in Lake Bluff, Illinois.  That director Robert Altman, and actors Carol Burnett, Lillian Gish, and Mia Farrow were spending the summer in Lake Bluff and Lake Forest making the movie was a big deal.  Celebrity sightings happened everywhere.

The friendliest of the film’s cast was Burnett.  People seemed to see her everywhere, and stories of her approachability made her a target for gawkers in these two small towns 35 miles north of Chicago.

My mom drove us to the Armour Estate on a bluff overlooking Lake Michigan one morning to try to check out the house where the film was set.  We pulled up to the security guard, a portly fellow named Ivo Pudak, and asked if we could circle around the drive inn front of the house.  He said no. Assuming security guards enjoy a doughnut now and then, we drove to the bakery in Lake Forest and picked up a dozen.

The jelly-filled bribe failed to impress Pudak enough to grant us access.  “Sorry, I would love to allow you back, but someone broke in last night and stole some of the wardrobe,” he told us.

I lobbied for a third run at or around this security stooge, but Mom had no interest in parking a quarter mile north and trying to walk in through the woods – or via the beach.

Mom decided we should drive past the Deerpath Inn in Lake Forest, the hotel where the cast and crew were staying, to see if Burnett was there.  We had done this many times the previous two weeks without seeing anyone famous.  This time, we got lucky.  There she was with her easily recognized red hair glowing like a beacon atop her ample head.

After parking, we approached her to ask for an autograph.  Because Mom is a social and chatty person, she regaled a very patient and accommodating Burnett with the story of our adventure at the Armour Estate.  As part of the tale, Mom mentioned Pudak’s aside that wardrobe had been stolen.  “What?  Wardrobe stolen?” Burnett asked.

Burnett bolted into the hotel, and grabbed the phone at the front desk.  “Hello, this is Carol.  Will there be a delay today because of the stolen wardrobe?  It wasn’t?  OK.”  Burnett turned to us and said the wardrobe was fine, and that the guard likely invented the theft in order to get us to leave without being unpleasant.

No one was too upset with Pudak’s deceit because here we were talking to Carol Burnett.  This was much better than driving past a house where a movie was being shot.

Mom regaled Burnett with another story – this one about how her Carol Burnett Show castmate Harvey Korman’s ex-wife was married to a distant relative of my Uncle Tom.  There seemed to be an endless number of links in the chain between Korman’s ex-wife and Uncle Tom, and Burnett listened intently through the descriptions of the people on each branch.

Finally, my friend Nick Anson said, “Which means they aren’t related at all!”  Burnett burst into laughter and said, “Oh, that’s funny!”

Burnett signed note cards for all of us and promised autographed pictures that we could pick up at the hotel the next day.

The movie was a strange mish-mash that never really came together.  It’s probably one of Altman’s most forgettable films.  But our experience with Burnett was very memorable as she was very patient and pleasant, and it was great fun to hear Nick make her laugh – even if Mom was the straight woman.