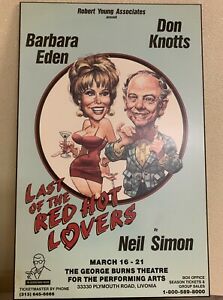 Don Knotts career as an actor came to this in 1993 – and this came to Indianapolis.

Don Knotts played Barney Fife on the Andy Griffith Show for five years in the 1960s and won five Emmys for his work.  He was on top of the world as one of the most beloved comedic actors in TV history – then.

By the 1990s, Knotts career had plummeted to the point where he was touring with Barbara Eden of I Dream of Jeannie fame in a production of the Neil Simon comedy The Last of the Red Hot Lovers, which made a brief stop in Indianapolis.

To promote the show, Knotts was scheduled to visit to WIBC Radio’s morning show.  This was not long after I began working at the radio station, and I was excited to meet the guy who played Deputy Fife.

I don’t like asking for autographs – it seems like something kids should do – not adults – but I wanted some kind of commemoration of our crossing paths, so I decided to get a picture taken with Knotts.

I needed to somehow make it unique.

My wife was a great softball player as a kid, and once received a giant trophy for hitting three home runs and driving 14 runs in a single game.  It was the biggest trophy either of us had, so I brought it to work as a prop for the picture.  I would ask Knotts the pose for a picture of him presenting me the trophy.

Knotts was painfully shy during the interview, indulging all of Jeff Pigeon and Terri Stacy’s questions about the Griffith show and his films The Ghost and Mr. Chicken and The Incredible Mr. Limpit.  As Knotts walked out of the studio, I told him I would escort him to his car, but asked if he would allow a picture.  He said sure.

I told him about the trophy presentation, and he was cool with that too.  I gave the Kodak Instamatic camera to a producer and stood with one arm around Knotts and the other holding the trophy as though he had just given it to me.  “The camera won’t work,” the producer said.  I put down the trophy and tried to fiddle with the camera.  Hoping we had it fixed, we tried again.  No luck.

“I’m sorry Mr. Knotts,” I said as I tried to advance the film.

“No problem,” Knotts said repeatedly as I failed in my efforts to fix the camera.  He stood there holding my wife’s giant trophy for 10 minutes without rolling his eyes or behaving in any way as though we were inconveniencing him.  Barney Fife would have been bouncing off the walls, yipping and yapping about the buffoon with the broken camera.  Knotts smiled blankly again and again waiting for the shutter to engage.

Finally, I threw the camera in the trash, and told Knotts he was off the hook for the picture.  His expression showed neither relief, frustration, nor amusement.

I walked him into the elevator, and the silence was intolerable.  I needed some kind of interaction – some evidence that the guy I watched in reruns was in there someplace.  “I just want to tell you that your work was brilliant,” I gushed.  “No actor has ever made more people laugh through inhabiting a character so completely.”  That moronic commendation wasn’t enough as we rode the slowest elevator in America from the third floor to the first.  I felt compelled to say something else to fill the uncomfortable quiet until the door finally opened,  “You were money in the bank!”

Knotts smiled vaguely without making eye contact as we finally exited.  He got into the waiting car and left to go through that same song and dance at TV and radio stations all over Indianapolis.  People would praise his work from 28 years before as he prepared for a night in a half-full theater with a woman occupying the same moment in a career arc that peaked for both many years before.

I used the trophy for many other pictures with celebrities whose desire to continue working carried them to Indianapolis.  Some showed good humor and others got angry.  None were as totally inscrutable as Knotts.  Was he aloof, heroically patient, or medicated?  I have no idea.

Maybe he was comfortable in the knowledge that his superb and sublimely hysterical portrayal of Barney Fife would always define him.  Who knows?

I just wish the camera had worked and I had a picture of the strangest interlude with a celebrity I’ve ever experienced.