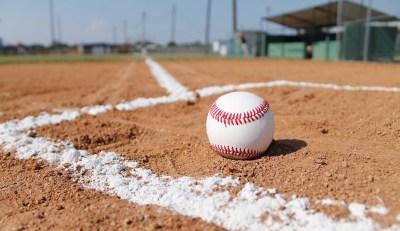 The pitch from a teammate we called Guido cut toward the inside corner as I tried to see something that might give me a hint as to which direction Marty might hit it.

With a runner on second with one out in a game we led 3-2 in the bottom of the seventh inning, I played three steps closer to the infield than normal for a hitter like Marty.  If he singled in front of me, I had a good chance to throw the runner at second out at the plate.  Buzz wasn’t fast runner, but he would almost certainly try to score the tying run on a base hit.

Marty had a closed stance and rarely opened his hips, so I always shaded him toward the right side of centerfield where my job was to turn anything hit in the air into an out.  Despite getting a single finger from a catcher we called Pink, it appeared Guido took a little off the pitch.  Maybe he had gotten a little tired, as he was two outs from a rare complete game.

Thinking fastball himself with the count 2-0, Marty was a tad out in front of the pitch.  I adjusted my lean toward right field into a step toward left.  The ball hit the barrel and jumped into the dark night.  The angle appeared similar to that of the countless home runs I had seen hit to left center field during Cubs games at Wrigley Field televised by WGN, but I saw that Marty had been forced to wait just a moment before releasing his hands to make contact.  This would not be a home run, but a fly ball that would die just in front of the billboards that served as the fence.

In perfect condition, with legs that could run and jump forever, I glided quickly toward the spot on warning track where I knew the towering fly ball would fall gently into my mitt.  The runner on second would never dare tag up and try to take third with only one out in a one-run game, would he?

I never tried to sprint full out after fly balls.  Keeping my head still while tracking the ball was critical to correctly predicting exactly where it was headed.  A 95% glide was much more effective than a 100% sprint.

Yelling “I got it! I got it!” until I heard the left fielder divert course, I adjusted my angle to try to get behind the ball so my momentum could carry me toward a strong throw to third.

I looked up to see the perfect white sphere float across that perfect black sky.  This was that moment of perfect enjoyment as an outfielder’s guess to where the ball will fall is proven right  – that instant that he knows the batter is out long before the ball is caught.

After playing for years and shagging thousands of fly balls during batting practice and games, that moment came early enough for me to slow time to a near stop so I could appreciate it as I ran through the situation one more time, “Buzz is the runner on second,” I reminded myself.  “He’s not fast, but he tends to be aggressive.  Have to turn it loose.  No one else is on, so airmail the cut-off man so he can’t get in the way and screw it up.  Put it on the bag and teach Buzz a lesson.  If he doesn’t go, still put it on the bag so he knows not to test me next time.”

The quiet interlude as I tracked the fly ball turned noisy and violent as I turned slightly forward immediately prior to the ball landing against the leather of my mitt.  Because I was already moving toward third base as I transferred the ball from mitt to throwing hand, a step was saved.  I aimed six feet left of third base as my throws tended to tail to the right.  I released with all the force I had.

An outfielder watching a throw leave his hand and head toward where he intended is like the inverse of tracking a fly ball.  Once it’s gone, there is nothing to think about or do but hope.  The work is done.  All that occupies your mind is the hope your arm was able to what you told it and that it will land 200 feet away in exactly the spot you intended.

Similar to a golf shot, when it’s good, you know it.  When it’s not good, that’s clear too.

Right trajectory over the top of Paul, our shortstop and cutoff man.  Perfect line too.  Buzz was running as I hoped he would, and if Charlie caught the ball clean, the game would be over.

The ball beat Buzz as he started his slide.  Charlie caught it, and Buzz accommodated by sliding into his mitt.

Those seven seconds between that pitch and the out to end the game might be the best of my life.