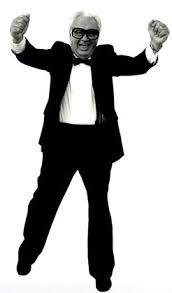 Harry Caray was the king of Chicago in 1991, so when a friend offered me a chance to have my three-year-old son meet him at Goose Island Brewery, I jumped at the chance.

There were four things Ryan would watch on TV when he was little – Indiana University Basketball, Michael Jordan, car commercials, and Cubs baseball.  The first day one-month-old Ryan was allowed out of our apartment, which was walking distance from Wrigley Field, we took him to see the Cubs get swept in a doubleheader.  He loved the Cubs as a kid as much as he does today as an adult.

At the time, I took improvisation classes at Second City, and one of my classmates was a funny and generous guy named Duncan.  Duncan, an Anheuser-Busch rep, knew of my love for the Cubs and he had gotten to know Ryan a little bit too.  One Saturday after class, Duncan mentioned that he had some passes to a meet and greet for Anheuser-Busch distributors with Harry at Goose Island.

I asked Ryan if he would like to come with me, and he was excited to meet the Cubs broadcaster.  Ryan was only three at the time, but Julie and I always treated Ryan like he was a miniature adult.  His say so was as important as anyone’s in our house.  At fast food restaurants, we encouraged him to order for himself, so he became conditioned to dealing with grown-ups – to the extent that counter staff at Taco Bell could be considered adults.

We drove our giant Oldsmobile to Goose Island and presented our passes.  There weren’t any other kids, which I anticipated, because this was a free beer event at a brewery not a day care teacher gathering.  Most would have felt awkward hauling a toddler into Goose Island, but I didn’t do awkward in 1991.  Ryan didn’t either.  We still don’t.

It didn’t take long to find Harry.  As always, he had a crowd of Budweiser distributors standing around him.  Harry held his can of Bud with the full label facing out as people posed for pictures.  There might have been days when Harry struggled saying “Assenmacher,” but he understood how to showcase a product for those who paid him to do it.  I’m not sure a human being has ever sold more beer to a city than Harry moved in Chicago.  As you might guess, he was very popular among the distributors.

I was not optimistic that Ryan would get to meet Harry at all.  It was likely that Ryan would have to settle for seeing Harry from a distance.  Anheuser-Busch was paying Harry to schmooze, not hang with a kid who just turned three.

Harry was in the middle of a story when he saw Ryan 30-feet away.  He interrupted his own story, “Excuse me.  I’ll be right back.”  Harry walked over to where we stood, bent down, and asked, “Hey, young man!  Do you like baseball?”  Ryan said he did, and that kicked off a two-minute conversation between the icon and an anonymous little guy who loved him and the Cubs.

Ryan shook Harry’s hand before he returned to the throng and finished his story.

People associate Harry with drinking and joviality, saying names backwards, and staying out until dawn, but he also had an enormous soft spot for children.  On that summer afternoon at Goose Island, he made Ryan feel just as special as those with whom he crossed paths on Rush Street at two in the morning.