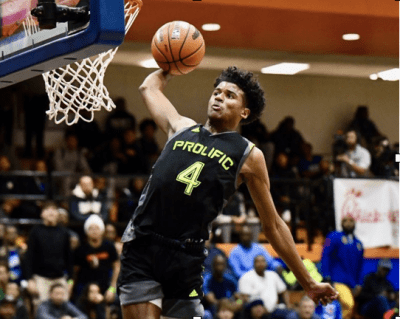 Jalen Green will never throw down for a college program, and that will not hurt college basketball even a little bit.

Jalen Green is the best high school basketball player in the country, and he’s going to jump straight to the pro’s rather than cool his heels in college for eight months while waiting to play in the NBA.

Isaiah Todd, a five-star recruit who had previously committed to Michigan, made the same decision earlier this week.

This has resulted in normally smart people gnashing their teeth over how college basketball can possibly survive without the star power of players like Green and Todd.  Yahoo Sports college basketball writer Pete Thamel wrote this yesterday, “The symbolic loss of Green is much more important than the singular loss of Green, as the creation of a new avenue for top prospects by Silver is a crushing blow to the sport of college basketball.”

There are few people writing about anything, much less sports, who are smarter than Thamel. But it’s hard to be more wrong than he is.  Green’s loss will not damage college basketball singularly or symbolically.

The NBA is about star power.  Whether LeBron James played for the Cavs, Heat, Cavs again, or Lakers, people buy his jerseys and pay a premium to watch him.  The same is true for Steph Curry and about a half dozen other NBA players.  Back in the 1980s, it dawned on the NBA to marketing around stars like Michael Jordan, Magic Johnson, Larry Bird, and Julius Erving instead of teams.  Smart.

College basketball’s popularity will never be about stars for two very good reasons.  The first and most important is that fans are tethered to programs, not players.  If you earned a degree from Indiana University or live in southern Indiana, it’s likely you will live the rest of your life as an IU fan.  The same is true for most popular college basketball programs.

Secondly, college basketball churns through players like that’s its job – because it is.  College attendance is a transitional exploit for not-quite-adults.  The vast majority of college basketball players stick around for four years, develop their game, and hopefully earn a meaningful degree before moving on to being a professional at something other than basketball.  NBA stars stick around for 15 years as global brands.

There can be a reasonable conversation about whether jumping to the NBA early is a good move for a student-athlete, but it’s a decision that is made by a small sliver of those playing college basketball.

If Green wants to spend his swing year in the G-League earning $500K, I’m all for it.  Guys went pro out of high school every year before the NBA instituted an age restriction that ended draft eligibility.  In 2005, the last year this was allowed, nine prep stars were selected in the NBA Draft.  College basketball rolled on because it doesn’t require Monta Ellis or C.J. Miles to thrive.  It has Indiana, Kentucky, Butler, Purdue, Duke, and Kansas.

It’s more likely that the loss of athletes who have no interest in playing college basketball as they await eligibility for the draft will enhance the popularity of the sport.  The familiarity and adulation developed over a four-year period is far more important to the health of a program than players who count the days as freshmen until they can earn NBA level cash.

Jordan Hulls and Calbert Cheaney will always be more beloved as Hoosiers than Eric Gordon or Romeo Langford.  No one buys tickets to see IU play at Assembly Hall because Langford wore candy stripes before leaving for the NBA.  Hell, Langford’s classmate Rob Phinisee will be remembered more fondly than Langford inn Bloomington despite there being only a small chance he ever plays a minute in the NBA.

College basketball is big enough to withstand the pay-me-now whims of a few 18-year-olds like Jalen Green because the sport is about the name on the front of the jersey – not the back.