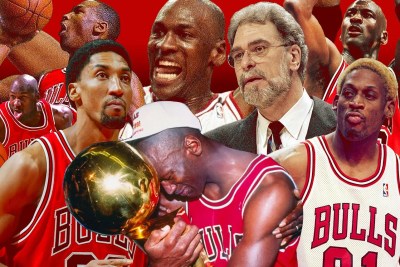 The first two episodes of The Last Dance lived up to incredibly high expectations as it showed the 1997-1998 Chicago Bulls – warts and all.

The Last Dance takes a fascinating look at the final season of one of the most compelling teams in the history of the professional – the 1997-1998 Chicago Bulls.

Michael Jordan is reaffirmed as a relentless and demanding leader.  General manager Jerry Krause is portrayed as a socially inept oaf whose arrogance almost derailed that final championship run.  And Scottie Pippen was petulant and unhappy with what he perceived to be a lack of loyalty from his employer.

Somehow, Pippen’s story wound up being the most memorable and interesting.

Pippen enjoyed a summer off in 1997 before finally having needed foot surgery just before the beginning of the season because he felt Krause was shopping him and because owner Jerry Reinsdorf refused to renegotiate the seven-year deal he signed in 1991.

The deal that Pippen asked for in 1991 paid him $19,445,000 over seven years.  The made Pippen one of the most egregiously underpaid players in the NBA, but Pippen signed the deal over Reinsdorf’s objection.  He told Pippen at the time the deal was a mistake, but there would be no renegotiation at the time Pippen realized it.

Pippen also failed to understand his role as a commodity for the Bulls.  Employers enjoy portraying themselves as a family, and young employees buy that lie.  Businesses are not families, and employees – first and foremost – are assets.  If an asset is better utilized in an exchange with another business, then management would be irresponsible to not make the deal.

Krause, while indelicate to the point of idiocy in the way he spoke publicly about trades and contracts, was 100% right.  Athletes are acquired and disposed of regularly, and those who covet security and the power of self-determination are in the wrong business.

And those who sign long-term deals that guarantee financial security for their family need to understand a signature conveys agreement with the terms of the deal.  Pippen signed a seven-year deal, not a six year deal with an option for a seventh.  Contracts mean something.

Pippen always seemed to have a childish lack of understanding of basketball and business compared to Jordan.  While Jordan needed Pippen to win six championships, Pippen needed Jordan more – much more.

Few can compare to Jordan on or off the court.  He is not only the best player ever, but one of the best business people.  Jordan understood that the greatest portion of his wealth would be generated through marketing where earnings are unrestricted by salary cap.  Pippen focused on all the wrong details.  He responded to problems with anger rather than solutions.

In 1994, Pippen was charged with a misdemeanor gun charge after Chicago PD found a 38-caliber handgun in his Range Rover.  Pippen said at the time he had the gun in his vehicle because he was concerned people might recognize and rob him.  His SUV carried a vanity plate “DA PIP.”

That’s Pippen.  He could have changed the plate to one without his name – or carry a gun.  The best solution to the problem was self-evident, but his response only threatened to create a new set of problems.

Part of the fascination with The Last Dance is to see how this great team composed of flawed parts came together to forge a championship run that has been unequaled in the last half century of American professional sports.

Krause – awkward and horrifying in his insecurity and arrogance.  Jordan – relentless in his demanding leadership.  Pippen – petulant and bitter as the all-time best NBA wingman.  Dennis Rodman – agonizingly self-destructive in all facets of life other than rebounding.  Phil Jackson – self-acknowledged genius conductor of this wacky orchestra.