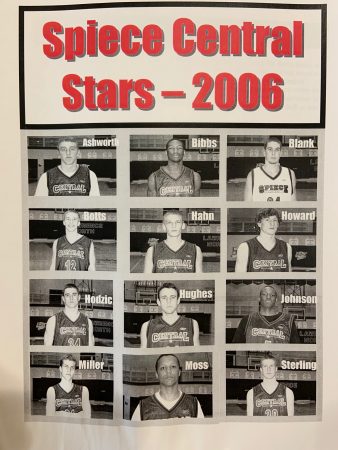 The Stars won the game and tournament over Derrick Rose, and they are winning at life too.

“They are going to crush you,” said the father of one of the players that Derrick Rose’s Meanstreets team had crushed in the semifinals of the 2006 Adidas May Classic at Assembly Hall in Bloomington.

The Spiece Central Stars had been here before.  Playing against the best of the class of 2007, this team of underrated, team-first players won plenty of trophies.  This was yet another challenge against a team built around a top-five recruit.

An hour later, Rose stood a mid-court with the ball on his hip watching the clock count down the final 12 minutes of the game.  His brother Reggie, serving as coach, yelled repeatedly to no one in particular, “We got done what we came here to do!”  The score was 63-19 in favor of the ironically named Stars, who moved, screened, blocked out, defended, and hit shots until Meanstreets and Rose quit.

The Stars featured one player who logged NBA minutes.  JaJuan Johnson played 36 games for the Boston Celtics after being selected 27th in the 2011 Draft.  But the basketball they played was built around a desire to win rather than fortify recruiting rankings, so they won a lot of games and tournaments over more talented but selfish players.

Derrick Rose is still playing in the NBA, having earned $121-million over a mostly disappointing 12-year career.

Yesterday, a tweet about Rose’s 2006 summer team drew a response from Zach Hahn, one of the Stars players, who is the head basketball coach at Center Grove High School in the south suburbs of Indianapolis:

Spiece Central Stars met them in the championship game at Addidas May Classic in Assembly Hall. We were UP 30 at halftime and they held the ball the entire 2nd half. Players sat on the floor. #MeanStreets #TeamGame https://t.co/eBVp6PJZvJ

That moment from 14 years ago is worth remembering because the style of play and the lessons learned from playing as collaborators with a singular goal of winning has served the Stars quite well.  Several, including Zach, have built a career instilling the same lessons to kids that helped shaped them into the productive adults they are today.

This team remains a lasting example of the good that can come from the often maligned experience of playing summer basketball.  Through their experiences, successful behaviors were instilled and reinforced.  Team-first collaboration led to 23 tournament wins and became a habit that led to success in college basketball and beyond.

Summer basketball is not about playing in the NBA or earning a college scholarship.  Those are the tangible results for some of those lucky enough to have been blessed with great health and athleticism.  The lasting impact of the lessons of basketball are in the discipline of working tirelessly toward individual mastery of skills and the glory of collaboration as part of a unit functioning to create open shots on the offensive ends and deny good looks on the other end.

Those lessons convert quite nicely to adulthood.  “Singular excellence implemented toward collective success” is about as concise and perfect a description of basketball as there is.  It’s also exactly how successful businesses operate.

Trophies tarnish and memories of championships fade over decades, but experiences that build character last a lifetime.  That can be the outcome of summer basketball in programs run correctly, and the Stars program provided that experience for some guys who gave great effort that led to short term on-court success and long term growth off of it.

Yeah, Rose has earned millions, and if that’s your measuring stick, go ahead and name him the winner of that tournament.  But not only did the Stars with that game and tournament, but their lives and those they touch have been immeasurably impacted by the time and spirit they dedicated to basketball and each other.