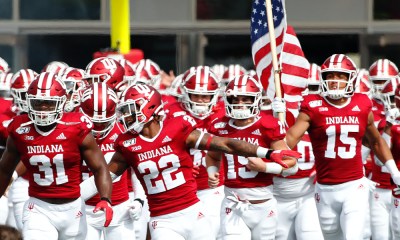 College football will be played this fall because its rewards outweigh the potential consequences.

There is zero chance Power Five schools will act as one to punt the upcoming college football season.  Players want to play, coaches want to coach, and school/conference administrators want money.  There is no constituency tethered to college football that would champion a cancellation or suspension of the season, so all that is left is for college football to be played as scheduled.

NCAA president Mark Emmert made a lot of sense yesterday when he said he will cede the responsibility to establish a start date for the resumption of sports to university presidents and state governments.  Why would Emmert want his organization to get involved as the healthcare clearing house for each individual university?  He’s way too smart for that.

That abdication of responsibility will leave the decisions to schools who are much more likely to view a resumption of college football as being critical to the survival of their athletic departments.  At the macro level, decisions are based upon what’s best for the most challenged.  In the micro, the decision is “What is best for me?”

Coronavirus is a problem of unique proportions depending upon geography and population density.  It’s a huge life-threatening issue in the New York metropolitan area.  In Iowa, Texas, and other midwestern states, it’s not nearly as big a deal.  Even by safety-first epidemiology standards, college sports will be seen as reasonably non-perilous in most regions.

And it isn’t just greed, but a desire to maintain scholarship levels by continuing to welcome massive amounts of media money into their budgets.  Any interruption of that revenue would be difficult for many schools to accept without making cuts.  The MAC has already cancelled or adjusted its tournaments in anticipation of budgetary shortfalls.

Adjusting fan levels – or eliminating them – is a conversation for another day.  We have no idea what the hell the world will look in August and September.  Just two months ago, we crammed ourselves in Bankers Life Fieldhouse for the Indiana vs. Nebraska game of the Big 10 Men’s Basketball Tournament, and no one that night dreamed we would be subjected to a second month of stay-at-home orders.  What will be allowed or necessary in another two months is guesswork at best.

What is beyond guessing is the need for cash into the coffers of athletic departments of Power Five universities.  College football will be played mostly as scheduled – with a few exceptions from those schools who react to this pandemic with well-intentioned hysteria.

But make no mistake, the need to return to normal financial conditions requires college football be played.  Without it, athletic departments will face dire consequences far worse than a few athletes developing Coronavirus symptoms.