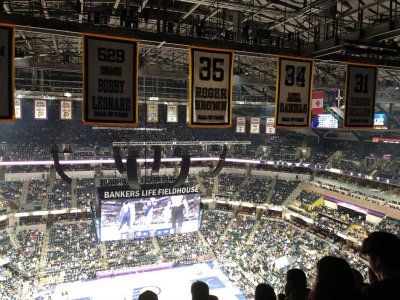 There is a banner missing from the rafters of Bankers Life Fieldhouse. All-time great NBA executive Donnie Walsh deserves one too.

The rafters of Bankers Life Fieldhouse are filled with names and numbers of the most important people in Pacers Sports & Entertainment history.  It’s time for Donnie Walsh to take his rightful place among them.

Reggie Miller is up there.  Members of the three ABA championship teams are alongside him.  Slick Leonard has a banner.  So do Mel Simon and Tamika Catchings.  Without each of those people, the Pacers and WNBA Indiana Fever would likely either not exist at all – or would be in a different city.

Walsh’s influence over the Pacers is as profound as any.  Miller is only a Pacers hall of famer because Walsh drafted him in 1987.  The Pacers built popularity through the 1990s because Walsh filled the Pacers roster with talented players who fit Larry Brown’s scheme.  He hired Larry Brown and Larry Bird as coaches, and led the team that designed and built the Fieldhouse – still America’s best basketball arena.

When the Indiana Pacers elevated Donnie Walsh from assistant coach to general manager in 1986, they set a course for sustained success that is unique in in the NBA.  From 1990 through 2006, the Pacers made the playoffs every year but one.

During that span, the Pacers advanced to the NBA Finals once and the Eastern Conference Finals six times.  The Pacers have not won fewer than 32 games in any season since 1990.   Just as important, Walsh brought other revenue streams into the building that have helped bridge the financial gap between the Pacers as a small market team and those in bigger cities that don’t need to be quite so creative to keep a smile of the face of NBA franchise owners.

Walsh built a roster, culture, and business model that brought consistent popularity and profits to the Pacers.  He’s a patient and smart man who understands the concept of hiring quality people and rewarding them, and he remains an important resource for the franchise.

Every practice I attend, there is Walsh sitting on the far end of the court watching as the sage but still very engaged architect of basketball teams – one of the best ever to build a roster.  He talks to front office management about what he sees, and hopes one day to see the Pacers win the championship that has eluded them from the time they migrated from the ABA to the NBA.

The idea that Walsh should be honored with a banner never occurred to me until Pacers radio play-by-play voice Mark Boyle mention it on the Dan Dakich Show yesterday as they discussed the 1998 Eastern Conference Finals matchup between the Pacers and Bulls that was a big part of Sunday’s finale of The Last Dance.  As with a lot of things Mark says, it makes perfect sense.

As with many successful managers, Walsh likes deflect praise toward staff.  If a man can be modest to a fault, Walsh is exactly that.  It’s time to give him his due despite his insistence he doesn’t need to be honored.

Here is an extended interview with Walsh that tells his story.  The best part of working in media is the chance to sit with incredibly smart people and learn from them.  Walsh was – and is – honest and fascinating: