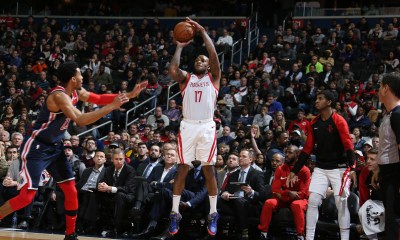 Corner threes – like this one from P.J. Tucker – have to go

Let’s get creative with rules of major league sports.  Leagues hate changing rules because they almost always result in a backlash from fans and participants, but I have no such aversion to angering people.

With that in mind, here are 10 rule changes that would likely generate great angst if they were adopted.  In time, people would embrace these major shifts that prize logic over tradition:

Instant replay should be abolished in all sports.  If a bunch of well-trained people can’t get the call right, that’s the way it goes.  Slowing play to a snail’s pace to get the clock right to the tenth of a second or evaluate a bang-bang play at first is not worth the occasional corrections.  The NFL is eliminating challenges related to pass interference, which is a step in the right direction, but it needs to say adios to all challenges.

College coaches should be paid at the same scale as professors.  If players are students, aren’t coaches teachers?  Of course they are, and if paying students on the same scale as pro athletes is wrong, college coaches should not be paid on the level of pro coaches.  As a concession to coaches, I would allow tenure to be granted to them, so schools would have difficulty firing them.

Three balls for a walk and two strikes for a strikeout.  How many times do we need to watch Cubs lefty Jon Lester run an 0-2 count to 3-2 to realize that watching pitchers nibble their way to full counts wastes our time.  In 2019, the average length of a Major League Baseball game expanded to a record 3:10.  That’s 40 minutes too long.  Shortening counts would shorten games while extending the number of innings a starter might throw and would likely keep pitchers from dealing with great fatigue – a primary cause of injury.

Eliminate the charge call in basketball.  Does it make any sense for a defensive player with his hands covering his junk to slide into the path of a 240-pound athlete sprinting toward the basket?  Of course not.  It’s not real defense, and it invites injury for both players.  The call for contact is either a block or play on.

Extend championship boxing matches back to 15 rounds.  How many great fights prior to trimming the length of championship contests to 12 rounds would have been ordinary if they ended after the 12th?  The Thrilla in Manilla, Ali vs. Frazier I, Duran vs. Leonard, Pryor vs. Arguello, Leonard vs. Hearns, and many others predating those epic battles would not be remembered as all-time greats.  Sure, it puts fighters at serious health risk, but what about boxing is actually safe?

All putts inside three feet are good.  Pro’s almost never miss at that distance, and amateurs only feel like crap when they miss them.  Three feet is long enough that most pro’s and amateurs mark and then putt in turn.  That extends the length of a round, and we need to quicken pace on the golf course somehow, so conceding three footers is an immediate must do.

Eliminate kickoffs.  Teams, coaches, players, and the NFL itself continues to work to resolve kickoffs with touchbacks.  Let’s just embrace the fact that kickoffs are dangerous and antiquated time wasters that exist only to separate commercials.  No one will miss them – at least not for long.

Ditch the DH.  Major League Baseball continues to try to reduce pitchers to arms without responsibilities elsewhere.  The American League underestimated fans in 1973 by adopting the rule that eliminated the need for pitchers to grab a bat and bunt or swing away.  Strategy went out the window and the careers of hitters who could no longer defend were extended.  Fans that enjoy baseball as a thinking man’s game confined their interest to the National League, and owners learned that no one in their right mind paid to watch Harold Baines or Edgar Martinez hit anyway.  The DH provides a solution in search of a problem.

No more postgame handshake lines.  Expecting competitive athletes to drop all that angst to wish their opponents well within seconds of the end of a game asks far too much of kids and adults.  I was in a handshake line after a high school soccer game when a teammate was sucker punched, and my son was in another one after a high school basketball game.  This well-intentioned indulgence puts kids in harm’s way with the only benefit being a mandate of false sportsmanship.

Widen the NBA basketball court by five feet.  Analytics tells us corner threes are the most efficient shot in basketball other than a dunk.  That is because the three-point line is only 22-feet from the basket in the corners, compared to 23-feet, nine inches elsewhere.  Who wants to watch the endless torrent of corner threes we see in the NBA?  The five foot widening would allow for the line to be uniform at all points, and end that barrage.  The reason for this being unpopular is the elimination of a row of premium seats and the cash they generate.

Tell me I didn’t just make damn near every American sport better!