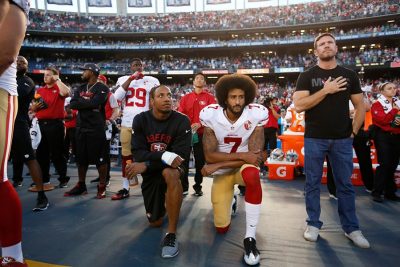 this protest by Colin Kaepernick bothered me. I am more bothered by the obvious and odious issue he was bringing attention to.

Racism has always baffled me, so I ignored it.

That’s what I do when I am confronted with humanity’s insistence upon making our world less pleasant and loving.  It’s as though we want to make our lives more challenging through self-imposed trials and challenges.

Racism doesn’t make sense, so while I was horrified by the killing of George Floyd by a Minneapolis policeman, I have not acted.  When I hear of blacks being targeted by police, I grieve for the loss of their hopes for fair treatment.  The riots that followed are tragic expressions of righteous anger by some and a thirst for anarchy by opportunists.

For many whites, the source of racism isn’t simply a need to hate.  People are insistent upon succeeding – whatever that means to them – and elevating themselves by standing on the backs of others is one strategy to gain an advantage.  From a pragmatic perspective, racism appears to be little more than the race of the majority suppressing a minority race to lift itself.  It’s a morally bankrupt ideology, but it continues to be expressed and felt in a variety of ways.

White people are at a distinct disadvantage when discussing racism because we have no idea what it feels like to be preyed upon in the way African Americans are.  Efforts to empathize are well-intended but ultimately fail because imagining what it’s like to be discriminated against and actually being someone is fundamentally different.

My strategy in dealing with racism has been to quietly reject it.  I try to treat all people equally, believing that racism is best fought on a micro level, one person at a time.  Obviously, that’s not getting the job done.  Racism is not going to fade because non-racists continue to treat all people as equals.  It’s the racists that need to change.

So the question becomes, how do we compel racists to alter their core belief that blacks are a sub-class rather than part of humanity?  We’ve tried shame, logic, and occasional moments of enlightenment when racists were prosecuted for crimes driven by their hatred or pragmatism.  We wind up with an unending series of atrocities and protests/riots.

Furious riots in Ferguson, Watts, Detroit, and Minneapolis have exploded, been extinguished, and nothing has changed.  Blacks are still targeted, persecuted, and killed because of the color of their skin.  Dr. Martin Luther King and Malcolm X led movements against racism and were assassinated.  Great thinkers and writers like James Baldwin and Alex Haley have made us think.  Athletes like Colin Kaepernick, John Carlos, and Tommie Smith made us angry before we understood that the only thing that gets our attention is what pisses us off.

The time has come for us to take racism as a personal affront – an expression of extreme narrow-mindedness and stupidity that requires an immediate and loud response.  When people insult our wives, mothers, and children, our emotions flare and defensive reflexes are engaged.  Whether through physical or loud verbal confrontation, we bring a consequence upon those who enrage us.

We need to engage with those who express hatred toward minorities with the same zeal we reserve for our family and friends.  If we are all brothers, then let’s safeguard one another as we would family members.

Not sure punching racists would change minds, but at this point it’s more important to not repeat mistakes than to coddle these fools, and white people dismissing racism as “not my fight” has been an American mistake dating back to the 1600s.

I used to think that racism would certainly cycle out of our society during my lifetime, despite 400 years of history that screamed the opposite, so now I’m going to do something about it in the small way I can.  Racist yammering and actions I witness will be met with great vengeance and furious anger.

In the past, racists believed they had safe harbor in my presence because I’m white.  Those days are over.  I’m done editing out racism from conversations rather than confronting it.