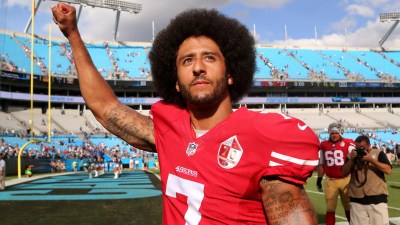 Colin Kaepernick would almost certainly have to accept a backup role if he wants to return to the NFL.

Former 49ers quarterback Colin Kaepernick has been out of work since 2016 in large part due to his taking a knee during the National Anthem prior to games.  But it’s not the only reason.

NFL Commissioner Roger Goodell said last night that he supports Kaepernick’s return to the NFL.  As it is likely a majority of NFL players will follow Kaepernick’s example of taking a knee during the Anthem to protest police violence against unarmed black men, Kaepernick’s stigma as an activist will no longer be a barrier against his employment.  General managers will decide his status based upon quarterback ability.

Whether he can still play after three seasons of dormancy will be determined in workouts.  Whether he could play when he was still with the 49ers is on tape and in the numbers.

Let’s look at the numbers.

Roughly half of the NFL teams would benefit from Kaepernick as a back-up, but there are precious few if any where he fits as a starter – regardless of whatever baggage he might bring to a franchise – especially now that the baggage will be diffused by hundreds of players across many sports.

Kaepernick is now clearly on the right side of history for protesting against police brutality.  We may be entering an era where the typical response to the National Anthem changes permanently from standing at attention to taking a knee to honor our flag, our country, and the fight for justice among people who have been preyed upon for 400 years – all because of Kaepernick.

Whether that makes Kaepernick slam dunk employable at the level of his choosing is a different issue.  Will he be satisfied with a prove-it deal to carry a clipboard and hope for an opportunity?  His answer to that question will determine whether 2020 will be yet another year when Kaepernick sits or suits up.